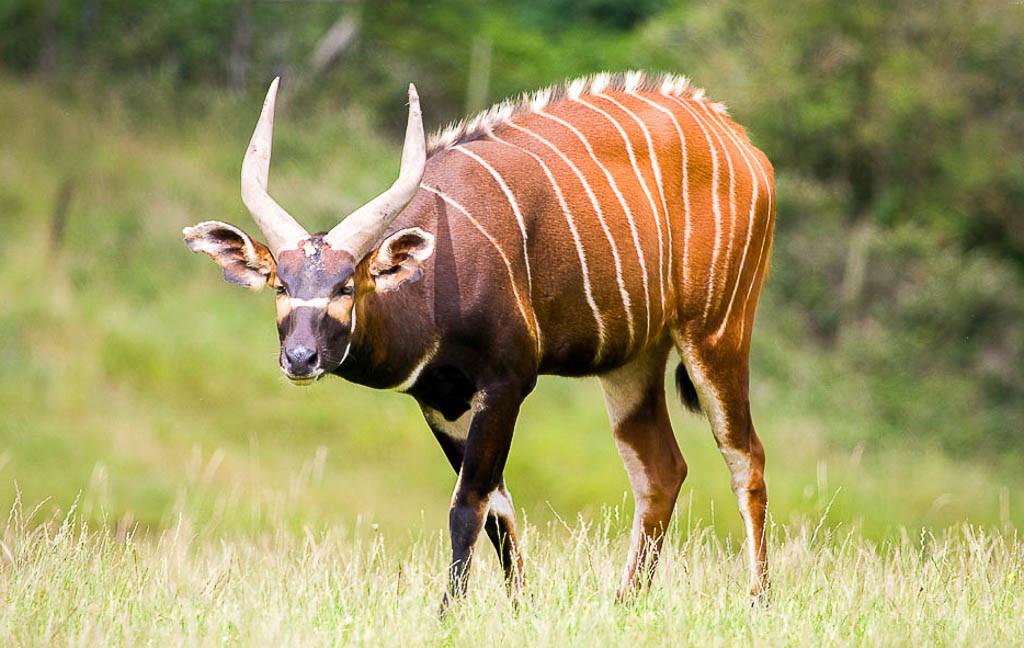 Global efforts towards the survival of the critically endangered Mountain Bongo antelope, have received a boost following four births at the Mount Kenya Wildlife Conservancy (MKWC) in recent weeks.

The births have renewed hope for the survival of the rare Mountain Bongo Antelope whose population of about 100 in the wild worldwide is below the threshold of 250 mature individuals required to make a genetically stable population.

“We are delighted at the recent deliveries of the four calves following a more than four-month lull,” said Don Bunge, the Wildlife Manager at the Mt Kenya Wildlife Conservancy.

The Mountain Bongo, is listed on the International Union for Conservation of Nature (IUCN) Red List of Threatened Species which is widely recognized as the most comprehensive, objective global approach for evaluating the conservation status of plant and animal species. The mountain Bongo’s population has declined due to unrestricted hunting, poaching, loss of habitat, illegal logging in forests among other reasons.

“The birth of the four calves will continue to inspire the Conservancy’s commitment to secure the survival of this rare antelope,” added Mr Bunge.

MKWC holds the world’s largest herd of Mountain Bongo now totalling 72 following the recent births. The conservancy runs a rehabilitation program that breeds mountain bongos for reintroduction into their natural habitat. It is the only conservancy in the world whose program is undertaken in a semi wild environment.

It is located at the vast Mt Kenya Game Ranch property which also hosts the famous Mt Kenya Safari Club and is owned by businessman Humphrey Kariuki. MKWC’s Bongo Rehabilitation program was named amongst the three most important wildlife projects worldwide in 2006.

The mountain Bongo is only found in Kenya in its natural habitat in the Aberdares, Mount Kenya, Mau Forest and Eburu Forest. It is one of the two sub-species of Bongo antelopes, the other one being the Lowland Bongo.

Bongos are characterised by a striking red chestnut colour with about 9 to 16 white stripes on either side of the torso or long, spiralled horns. They are considered by many as the most beautiful antelope. Males weigh up to 450kgs whereas females weigh up 250kgs hence making them the largest/heaviest forest antelopes.