Being a Kenyan, political and business interests will pile up in Peter Ndegwa’s in-tray and phonebook.

Two months and three weeks after the death of Bob Collymore, the Safaricom Board has finally made the most important announcement for the company.

Now Kenya’s leading mobile operator has a substantive CEO and – if it makes anyone happy – he’s a Kenyan.

Peter Ndegwa, little known in corporate Kenya because of his mostly international assignments at Diageo, takes over at a critical time for Safaricom. While it holds the most profitable company record and market leader in voice, data and money transfer, its millions of customers still find it hard trusting it.

Many still feel its charges are not only very high, but also its charging system plays monkey games with airtime and data bundles. Little wonder its new strategy focuses on the company being “simple, transparent and honest”.

Ndegwa, who takes over from acting CEO Michael Joseph, will need plenty of supply of these three attributes at Safaricom as he adjusts from making people high to making them say ‘hi’ more often using the green SIM card.

At Diageo, a global leader in the alcoholic beverages business, Ndegwa is currently serving as Managing Director of Continental Europe.

Appointed in July 2018, he became the first African to run a large business for Diageo outside of Africa.

Back in Kenya, he will be the first Kenyan to lead Safaricom, a company that has become an icon of prudent management and innovation. Well, you could say, also a money-minting machine.

M-Pesa is trending, with virtually no competition in mobile money transfer. In voice, Safaricom literally cuts and eats its cake. But that commanding lead can change overnight if anything goes horribly wrong in strategy.

Also, a big threat on the horizon is the planned merger between Airtel Kenya and Telkom Kenya, which will create a two-horse race for the market, presenting an environment for price wars that can easily cause haemorrhage for Safaricom.

Being a Kenyan, political and business interests will pile up in Ndegwa’s in-tray and phonebook, with customers closely watching quality and cost of services and judging its fidelity to its new measure of success of simplicity, transparency and honesty.

The presence of foreign CEOs backed by Safaricom major shareholder Vodafone – first Michael Joseph, then bob Collymore (RIP) – had sort of created a firewall that insulated the company against interference in management and deal-cutting in procurement and employment.

Unlike beer consumers who are hardly picky, mobile users in Kenya have earned the peculiar.

This is where Ndegwa’s management prowess and personal integrity will be tested. He will need the inspiration, as he says, of his primary school teacher, the legendary Dr Geoffrey Griffin, the late founder of Starehe Boys Centre.

In short, Peter Ndegwa has the chops for the job.

“Instead of just looking at what governments can do, we need to acknowledge that large organisations can improve society and shift how people think and feel,” says Ndegwa.

“For me, this is about working with others to build sustainable businesses that can make a difference in people’s lives.”

That difference will largely depend on how he deals with the transition from acting CEO Michael Joseph and balance board interests of Vodafone, the government of Kenya and, of course, holders of listed shares at the Nairobi Securities Exchange.

Mobile users are very fickle. Unlike alcohol consumers who aren’t the picky types, mobile users in Kenya have earned the peculiar tag for things like making calls almost at the same time and clogging the network.

Often, they are on the lookout for an opportunity for free calls or data bundles, even if it comes through the illegal activities of compromising the Safaricom system.

Ndegwa is credited with the development of an affordable-beer strategy for EABL resulting in the launch Senator beer, which became one of the most successful innovations.

This obviously hoists expectations from Ndegwa at Safaricom. Joseph, for instance, brought per-second billing and M-Pesa. Bob Collymore, for his part, bested the M-Pesa ecosystem and took it international and mainstreamed value-added services.

Ndegwa will have to pull out something extra-ordinary to clear these hangovers. He should get to Micheal Joseph Centre with innovation cap on to join the gang of tech nerds who crack their heads to keep Safaricom on top of the game.

“We are confident,” says Safaricom Board chairman Nicholas Ng’ang’a, “that Peter will carry on our vision of transforming lives while keeping us focused on meeting our customers’ needs and holding us to our new commitment of being Simple, Transparent and Honest.” 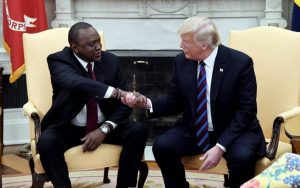