This comes after a traditional engagement ceremony held in February.

The Ngurario will take place at Kiamugumo Primary School, Kirinyaga according to details on the invite cards.

It is interestingly noted that the governor has dropped the name Waiguru from the invite card and refer to herself as Anne Mumbi. 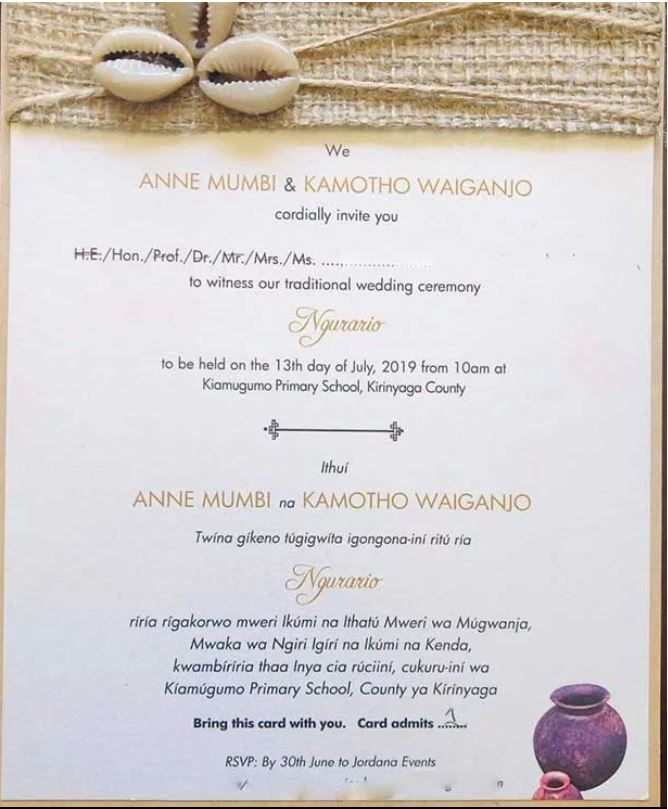 Mr Kamotho, former commissioner for Commission for Implementation of the Constitution (CIC) proposed to the governor in Runda Hotel during his birthday celebration attended by close friends.

The governor confessed to feeling girly and shy as her soon-to-be husband bend the knee to take their relationship to the next level after dating for a while.

The two met about 10 years ago at ferry Likoni, Mombasa where they were both consulting for parties that were negotiating the constitution. Kamotho was a team leader and Waiguru had been sent to advise them on public finance chapter.

{ Read: Governor Waiguru can dance and sing better than you }

With few information about their relationship being aired to the public, the two have painted a picture of a normal couple with fights and adoration.

“It was a beautiful ceremony. The time was right for us to take our relationship to the next level,” Mr Kamotho once told a local media house.

Both of them are divorced and it is believed that their ex-spouses have accepted that the two are destined together and are now supportive.

It is however, not clear if the governor will drop her ex-husband’s name Waiguru and adopt the surname of the first gentle man of Kirinyaga Waiganjo.