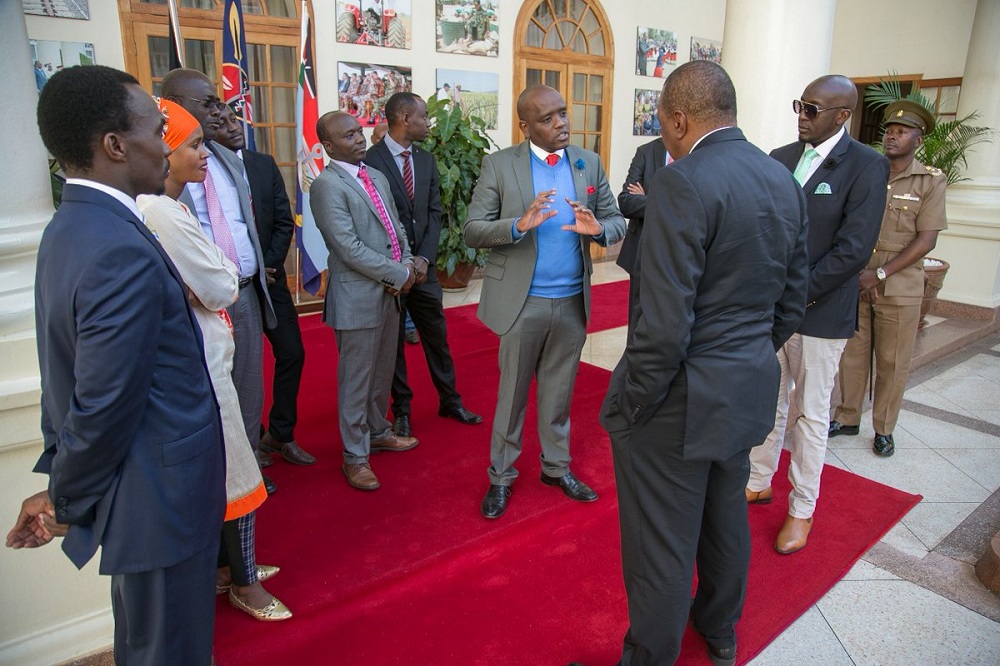 Published on their paper on 16th August, the Star apologized to James Kinyua Murithi, Eric Ng'eno and Charles Momanyi for inadvertently reporting about them. Itumbi (pictured speaking to the president) was not mentioned. Photo/ Courtesy.

Presidential Strategic Communications Unit (PSCU) senior directors were kicked out of State House for repeatedly embarrassing the presidency and waging a six-year war against their former head Manoah Esipisu.

According to blogger and freelance journalist Owaahh (Owaahh.com), the President was so annoyed by the senior directors’ war against Esipisu that he banged the table at a meeting in August declaring he had confidence in the man he plucked from the African Development Bank to take charge of his communications upon his ascension to the top job in March 2013.

“I hired Manoah for a reason,” the President angrily said, staring his communications team down, “either take instructions from him or ship out! You will do what Manoah says. You will send him weekly plans of what you are doing, and weekly reviews of what you’ve done! And no more media appearances except with express permission from Manoah!” the respected blog quotes the President as stating.

Apparently, the senior directors, James Kinyua (Events and Branding), Edward Irungu (Press), Munyori Buku (External Communications and Media ), Dennis Itumbi (Digital, New Media and Diaspora) and Eric Ngeno (Speechwriting and Research) had hoped that the President would appoint one of their own to be in charge of the PSCU as a reward for sprucing up his image ahead of the 2013 polls and sought to undermine Esipisu whom they considered an outsider.

Others in the room were Esipisu, Munira Mohamed, David Nzioka and Big Ted. The group is alleged to have created parallel social media accounts while locking Esipisu from official State House platforms and issuing instructions to juniors to sideline him.

However, matters came to a head when Nzioka Waita, who replaced Joseph Kinyua as Chief of Staff, ordered them out of State House after they embarrassed the President by reacting to a New York Times story on the International Criminal Court case against him, his deputy William Ruto and former radio journalist Joshua Sang. In the response, they denied the newspaper had sought comment from State House while the contrary was true.

At the time, President was in Gaborone, Botswana to bolster support of African leaders against his indictment.

Though they found their way back to State House with Ruto’s support, the tide against them appears to have been unstoppable.

Matters came to a head following the appointment of former Citizen TV anchor Kanze Dena as Esipisu’s replacement following his nomination and subsequent appointment as Kenya’s High Commissioner to the United Kingdom when the senior directors also sought to undermine her.

Nzioka was quick to cut them down to size by deleting social media accounts that they were using to communicate to the public.

The former senior directors have since realigned themselves and most of them now work from Ruto’s Harambee House Annex office where they hope to repeat the magic that gave Uhuru tenancy at State House come 2022.