In the book, Awori touches on Kenya’s political landscape, family background and the development he steered in the country while holding various positions.

At a colorful event that was attended by several dignitaries at the Safaricom’s Michael Joseph Centre in Nairobi, the former Vice President said his source of inspiration comes from his 17 siblings and influential people in the society among them businessman Manu Chandaria.

“Through this book, my association with other Kenyans is evident as it depicts how I have thrived in social works and business through friends who have been by his side to assist where necessary,” added Awori. 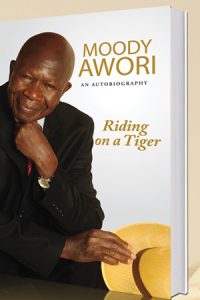 Awori, who is popularly known as ‘Uncle Moody’, said as a young man of his time, the urge to lend a hand in rescuing motherland from the colonial grip prompted him to abandon his teaching job and venture into politics, a move that saw him rise to become the country’s 9th Vice President.

.The 32-chapter autobiography published by Moran East Africa focuses on the historical intrigues, the ever-shifting politics, leadership and development, the second wind of change in Kenya, and political betrayals in the country.

The autobiography also talks of the reforms Awori made at the P****n Institutions during his tenure at the Ministry of Home Affairs. “Many people will say that a p****n is a place of p********t and the physically challenged are doomed and unproductive but I recorded remarkable ideologies making prisons a place like home and restoring human dignity,” said Awori.

“The act of passion impacted on me during my childhood has made me participate in building self-esteem of the physically challenged and make sacrifices in terms of time and material,” he adds.

Awori also mentions the end of tribalism as a key factor in his life especially when one places the interest of the nation on the first lane, noting that the question was racing on everyone’s mind as he was seen not keen on supporting FORD Kenya yet he came from the province where the party had solid support.

“My book exposes the MoU that many believe is the genesis of the cruelest skirmishes that have ever been experienced in Kenya, and my life in politics, how I balanced it and feeling the heat of how not to be a politician in the Kenyan sense,” said Awori.

Cabinet Secretary Environment and Natural Resources and a niece to the veteran politician Prof. Judi Wakhungu said ‘Riding on a Tiger’ gives an epic account of history, politics, family and business.

Awori’s daughter Patricia Awori read excerpts from his father’s book and said that the main message of the memoirs is to encourage people to write their stories that will help them move ahead.