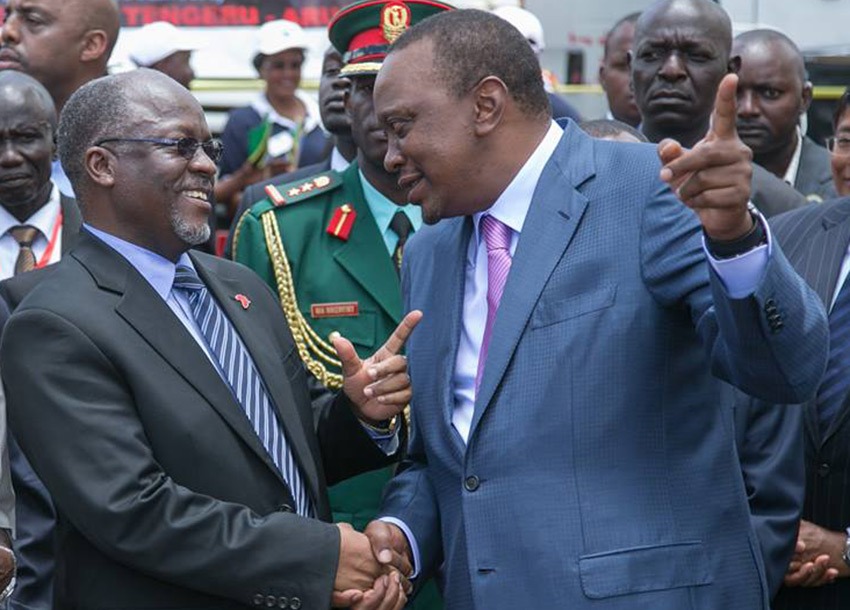 President Uhuru Kenyatta (right) and his Tanzania counterpart John Magufuli (left) during a past meeting. The two countries are locked in a diplomatic war.

Tanzania will not allow Kenya Airways planes within its airspace as retaliation for Kenya’s failure to include its neighbouring country in a list of countries that will be allowed to fly into Nairobi once it resumes international flights on August 1.

The Tanzania Civil Aviation Authority (TCAA) In a statement issued on Friday evening made it abundantly clear that the decision was a retaliatory move by the Tanzanian government after Kenya fired the first salvo.

“The Authority regrets to inform you that, on a reciprocal basis, the Tanzanian Government has decided to nullify its approval for Kenya Airways flights between Nairobi and Dar/Kilimanjaro/Zanzibar effective August 1, 2020 until further notice,” the letter read in part.

On Thursday, The Kenyan Transport Ministry generated a list of 11 countries that will be allowed into the country once Kenya resumes international flights. That list did not include Tanzania.

The countries that will be allowed to operate flights to Kenya include; China, South Korea, Japan, Canada, Uganda, France, Namibia, Zimbabwe, Ethiopia, Rwanda, Switzerland, and Morocco.

In the statement, Transport Cabinet Secretary James Macharia observed that the aforementioned countries have effectively managed Coronavirus in their own borders enough to be allowed into Kenya.

He however underscored that Kenya will keep updating the list as time passes.

Passengers jetting into Kenya will be required to produce a PCR based COVID-19 certificate whose test should have been administered 96 hours before travel.

“Let it be clear that those who will have a certificate of tests done before the stipulated 96 hrs will not be allowed to board in the first place. On arrival the passengers’ temperature should not exceed 37.5 degrees and not display any COVID-19 related signs,” CS Macharia said in a press briefing.

While making his address to the nation earlier this week, President Uhuru Kenyatta took a swipe at “some countries” for not being transparent with its citizens regarding the prevalence of COVID-19 in their countries.

‘The fact that countries do not report everything that happens in their country, we are an open society, we tell our story, our media is free, we do everything we can to tell the facts as they are,” said President Kenyatta.

Elsewhere, Tanzanian President John Magufuli has declared Tanzania COVID-19 free to the extent of reopening schools while Kenya has written off a full academic year over fear of exposing learners to the virus.

“COVID-19 has been eliminated thanks to God,” Magufuli told congregants in June.