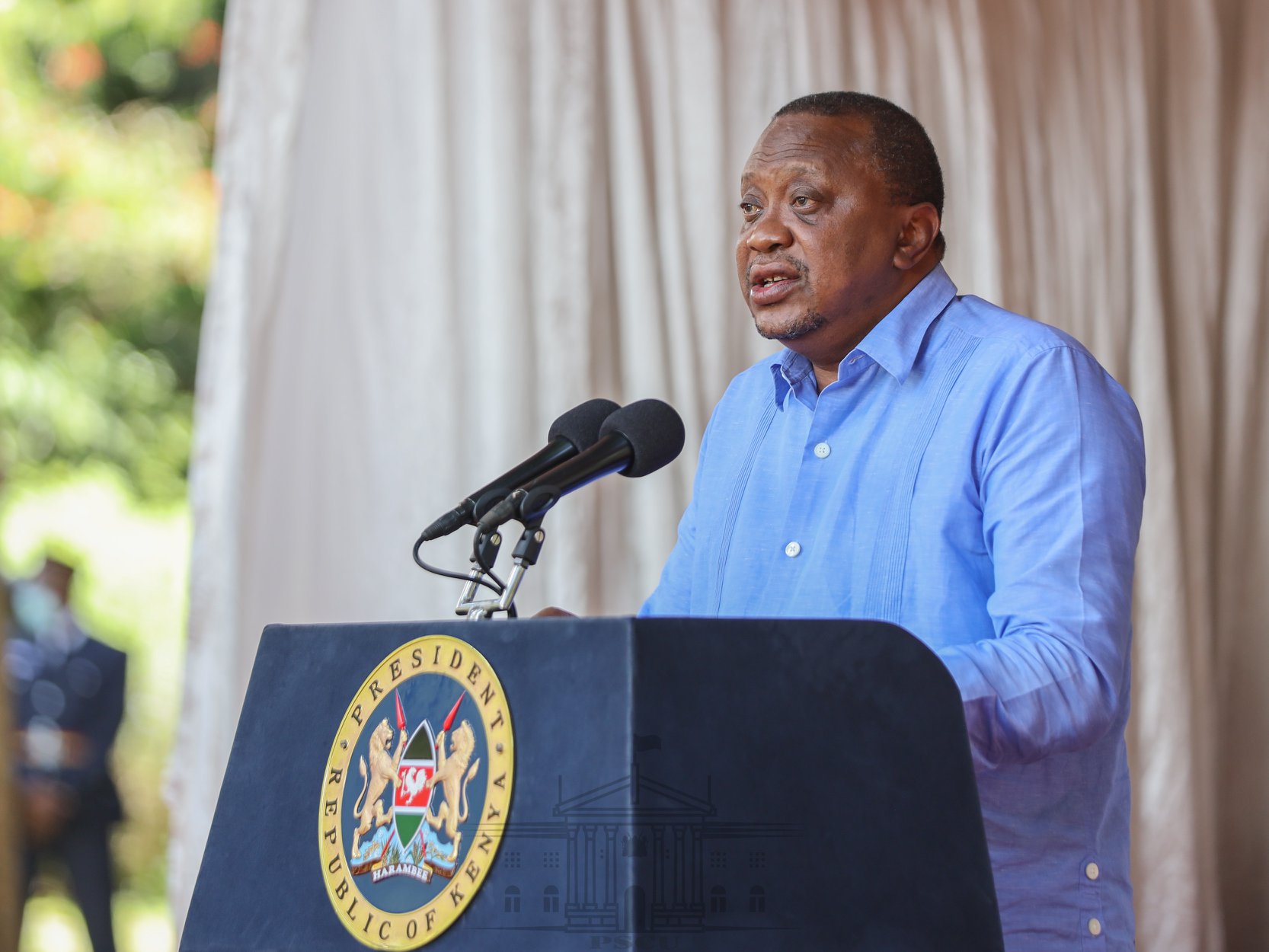 President Kenyatta giving his speech in tribute to the late Wangari Maathai on World Environment Day on June 5. The President ordered for the indefinite closure of bars on Monday.

President Uhuru Kenyatta on Monday ordered for the immediate closure of bars effective Tuesday, July 28 at midnight following a spike in COVID-19 cases in the country.

This will come as a blow to bar owners who depend on the business to sustain their livelihoods. They are now at the mercy of the government which now wields all the power on when the establishments they source their income from will be reopened.

Uhuru further ordered that the bars which operate in violation of the directive will have their licenses revoked by the Inspector General of Police (IG), permanently.

The president also ordered the IG to publish a list of all bars which violate the directive on a weekly basis and furnish Interior Cabinet Secretary Fred Matiang’i with the document.

Speaking after the COVID-19 Summit between himself and the Council of Governors (CoG) on Monday, President Uhuru Kenyatta also ordered the seizure of sale of alcohol in restaurants and eateries effective Tuesday, July 28 at midnight The closing hours of these sets of establishments have been revised from 8:00 pm -7:00 pm.

President Kenyatta also ordered the extension of the nationwide curfew by a further 30 days in an attempt to flatten the COVID-19 curve in the country.

“When we de-escalated 21 days ago, I said that I would not hesitate to re-escalate again if reckless behaviour is widespread,” said the Head of State.

Uhuru further directed the Ministry of Health (MoH) to develop a protocol to temporarily retain retired ICU staff and anesthesiologists to support staff assigned to dealing with serious COVID-19 cases in the counties.

The Inspector-General of Police was also directed to ensure that administration and regular police enforce the Ministry of Health’s guidelines on political gatherings and particularly at funerals without fear or favour.

Further, all government institutions including all sporting facilities, educational institutions, and other government facilities upon designation by the Health Cabinet Secretary shall be availed to the Ministry of Health for isolation and quarantine purposes

Last week, Nairobi Senator Johnson Sakaja who at the time was chairing the Senate Committee on COVID-19 was arrested at an entertainment joint consuming alcohol past 9:00 pm, when the nationwide curfew starts. He has since resigned from the post.

“All the measures that I shall be announcing today shall be applied to all citizens regardless of their social or political standing. If and when necessary, these measures will be made more stringent,” said President Kenyatta.

President Kenyatta also challenged the argument by economy experts critiquing effecting more stringent measures under the theory that the economy will hurt even more.

“We also understand that the economic health of our country is ultimately tied to keeping our infections and fatalities as low as possible. For those who argue the economic argument, there will be little tourism, scarce investment and falling trade if our headlines start to match countries that have been hardest hit by the pandemic,” said President Kenyatta.

“If we want to preserve our economic health, we must begin by preserving our physical health and that is a responsibility for all of us,” he added.

The president also observed that the reason why COVID-19 numbers continue to rise by the day is because of poor compliance with the Ministry of Health guidelines by Kenyans, hence why the disease does not appear like it will abate anytime soon.

“The reckless actions of some are endangering the lives of those around them,” he said.

“We are not living in what you would call normal times. Countries whose citizens have developed a lax attitude have suffered greatly, let us not think we are immune or special. We are not. Please fellow Kenyans let us not follow the examples that we have seen across the world. The fact that countries do not report everything that happens in their country, we are an open society, we tell our story, our media is free, we do everything we can to tell the facts as they are,” said President Kenyatta.

“The government will not police the morality of its citizens. Citizens must balance between their individual rights and their responsibility to each other, We cannot have a policeman in every street, in every village, in every home to enforce the rules, we need to as citizens to hold each other accountable,”

“There are other countries that are suffering greater than we are but don’t report. So don’t look at yourself as being special, none of us are. Some countries with the most advanced medical systems in the world have been completely overwhelmed by this disease,” he stated.