News Just In was released in 2017 but has never been watched in Kenya. Photo/Showmax

The Kenyan Film Industry is still on its development stages as it cannot be compared to the World big wigs (Hollywood) or even Africa’s bigwig (Nollywood).

However, comparing the Kenyan film sector to these bigwigs can be likened to building castles in the air the Kenyan industry still has a long way to catch up. Despite being on two different levels, the Kenyan Industry is still striving to reach Hollywood’s or just Nollywood’s stature.

Among things that hinder the Kenyan film sector’s steady growth are the regulations put in place for movie productions.

We have seen a number of Kenyan films banned after failing to survive after going through the offices of the country’s moral prefects. One of the local films to have been affected is the famous ‘Rafiki’ which was banned in Kenya despite getting global recognition.

Rafiki might have been the most famous film to be banned in Kenya because of breaching moral regulations but it definitely not the first. In 2017, another film by the name ‘News Just In’ was banned in the country but showcased in South Africa and Ghana.

Showmax Getting Back a Banned Movie

There might be some hope for Kenyan film producers to explore any idea they wish to. This is after Showmax brought back a ‘News Just In’ which was banned in the country. The film was branded as too risqué for the Kenyan audience by local stations.

“We were not able to sell ‘News Just In’ to a local Kenyan station because of how edgy the content was and as such it was only aired in South Africa and Ghana. It was disappointing that Kenyans were not going to be able to watch the show at the time of its completion but they say its better late than never,” Njagah says.

There’s no denying that Lizz Njagah has been dearly missed on our screens ever since she relocated to Greece in 2016 with her husband, filmmaker Alex Konstantaras. But that’s about to change in 2020 as the actress who’s appeared in some of Kenya’s top TV shows such as Jane and Abel and How to Find a Husband (and even Nollywood’s beloved Tinsel) prepares to make a comeback. Despite her three-year hiatus, Njagah says she’s not out of the game yet and her acting career is still intact.

“My move to Greece didn’t slow down my career per se, I consciously took a break to focus on my kids, and now that the second one is older, I am back in business. As much as I have done very little acting work since my move, I have still been involved in creating and writing different projects which you will hear about soon. 2020 is also the year I get back into acting. I have been approached to be in some productions that will be shooting this year so I will be traveling back to Kenya,” she says.

Through Historia Films, a production company she founded with her husband, Njagah has written, produced and also starred in notable productions like the award-winning risqué comedy House of Lungula (2013) and Fundi-Mentals (2015), both which received immense praise in Kenya. However, their comedy-drama series News Just In which was released in 2017 didn’t get the attention it deserved in Kenya because it was branded as too risqué for the Kenyan audience by local stations.

News Just In is one of the first local shows on Showmax’s line-up in 2020 as the streaming platform prepares to pick up more local content yet to be aired anywhere else in Kenya like Raymond Ofula’s-led The System which will land on Showmax in February.

This could be the beginning of seeing other banned films make a comeback to the Kenyan market. 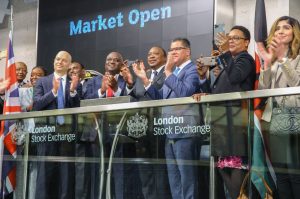