Ricardo Badoer says microfinance institutions are easier to take over and can be turned into full financial bank later.

Dubai-based investor, Ricardo Badoer, has set his eyes on the Ugandan market, with plans to acquire a financial services provider. Through his company, Badoer Investments Ltd, Ricardo is shopping for bank in Kampala as he expands his presence in East Africa’s banking industry.

Badoer Investments already has a footprint in Kenya through Sumac Microfinance Bank and Tanzanian’s Hakika Microfinance.

In February 2019 the company pumped $1 million (Tsh2.2bn, Ksh100 million) in Hakika Microfinance Bank, giving Ricardo a 20% stake. Earlier, in July 2018, it pumped a similar amount into Sumac Microfinance Bank for 15.6 per cent stake in the SME lender.

Ricardo did not reveal whether he has already secured a deal in Kampala but said he has a growing appetite for financial institutions.

He appears to be on a buying spree for budding banks, which he says are “cheaper and easier to take over and can be turned into full financial bank later.”

With a background in offshore banking, Ricardo’s idea is to attract international investors into his emerging banking network.

The world’s super-rich had as much as $32 trillion of hidden financial assets in offshore tax havens, according to figures published by Tax Justice Network in 2012. That figure is believed to have ballooned to $40 trillion currently. With banks in the three East Africa nations, Ricardo is betting on having a bite at this treasure trove of investments.

Ricardo, a football lover, has lately been channeling huge investments into East Africa in various sectors including sports, manufacturing, media, trade and banking. 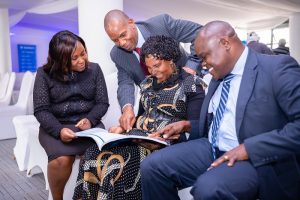