Ethiopian Airlines still tops in Africa in terms of passenger traffic, according to latest ranking of African airlines, as Covid-19 continues to shake up the continent’s aviation industry. A new report by AFRAA (African Airlines Association) shows Ethiopian Airlines handled over 5 million passengers last year, followed at a distance by Egypt Air with three million.

The number of scheduled passengers carried by African airlines dropped from 95 million in 2019 to 34.7 million in 2020, representing a year-on-year decline of 63.7%. The reduction in traffic continued until June, before reversing with the gradual opening of borders.

“Those 5 airlines carried 4.8 million passengers on domestic routes during the year,” says the report. “International traffic represented 57%, breaking down into 19% of Intra-African and 38% of intercontinental passengers.”

At the continental level, Europe is the first international destination of African airlines, representing 21% and even exceeding Intra African traffic (19%), domestic excluded. Traffic to Middle-East tended to increase, while traffic to Asia reduced due to Covid.

Africa airlines were severely impacted by the Covid19 c****s. If the first cases on the continent appeared at the end of February 2020 in the northern region, the restrictive measures started to be applied in March. The impact was drastic for the traffic.

The Covid19 c****s had a devastating impact on airlines finance around the world. For African airlines, whose financial situation was already precarious, the impact was even greater. For the year2020, the passenger revenue loss is estimated at $10.21 billion.

Quarter2 and 3 was the most affected, before a smooth recovery in the 4th quarter. According to AFRAA forecasts, African airlines will continue to lose money in 2021, even if the amount will reduce. It estimates overall passenger revenue losses for 2021 at $8.35 billion. 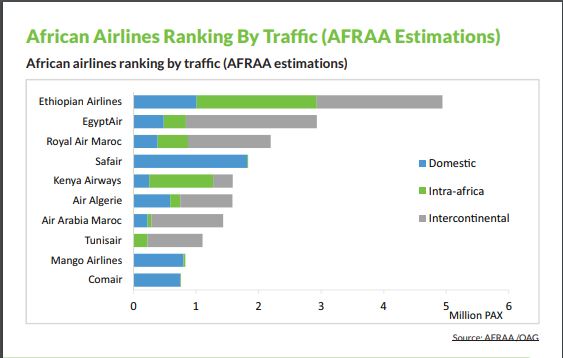 South African airports had to wait for the last quarter of the year to have a noticeable improvement. Lagos and Marrakech on the other hand saw a decrease in traffic during the third quarter.

Nairobi’s Jomo Kenyatta International Airport handled more than 330 thousand tons of freight during the year 2020. Cairo followed with 280 thousand tons. Four West Africa are part of the top 10, namely Lagos, Accra, Dakar, and Abidjan. For the majority of these airports, freight traffic strongly rebounded after the drop of quarter 2. Nairobi even performed better in Quarter 4 compared to Quarter 1.

African Originals to Cede 10% Stake To Customers Through Crowdfunding

Africa’s Next Crop Of Billionaires Going Up In Space

How Twitter Could Change After Elon Musk’s $44B Buyout