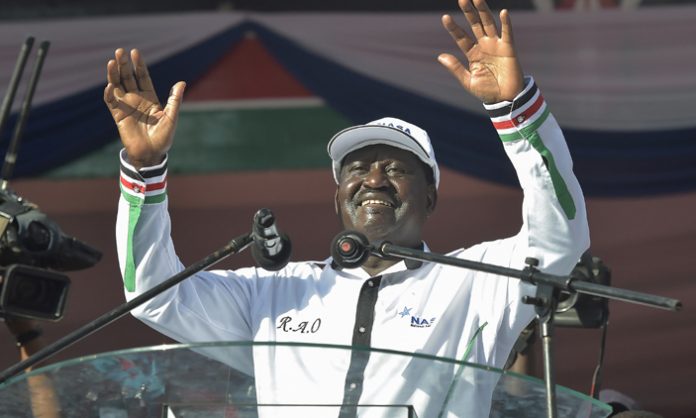 NASA chief Raila Odinga is set to make his way to Uhuru Park ahead of the planned swearing in ceremony scheduled for this afternoon. ODM Party national chairman John Mbandi has said Raila will together with the other principals arrive shortly after noon.

NASA supporters have kept streaming in to Uhuru Park with leaders among them ODM Chairman John Mbadi and Homa Bay Senator Moses Kajwang but the venue remained in disarray without public address system and no clear sitting arrangements. NASA officials have kept Raila’s location secret.

This happens as  officials of the communication Authority  keep shut leading television channels’ transmission lines over broadcast of the political events in Kenya as opposition leaders surge ahead with their oath taking plans.

Royal Media Services Citizen Television and Radio Citizen have been tentatively denied transmission rights on infrastructure based in Limuru. Nation Media Groups’ NTV has faced the gag after its free to air channel was switched off by the CA officials.

ALSO READ: How to watch Raila’s swearing in without a TV set

The leaders have condemned the shutdown of the broadcast channels saying this had come us an impediment on media freedom.

Royal Media Services had not been informed of why the move had been effected at the time of publication. In statement, the RMS Managing Director said they were exploring a return to air formula and hopes to resume transmission.

“We would like to confirm that this morning the Communication Authority disconnected Citizen and Inooro TV transmission.”

“There has been no official communication as to why this action was taken. We are actively engaging the relevant government authorities to establish the reason for this action.We hope to resume normal transmission as soon as possible,” said the MD Wachira Waruru.

“It is unfortunate and the media must join the fight for liberation of this country. It is not proper. The media is just a messenger and we are going to fight this,” said Mbadi.

SEE: How KTN managed to stay on air after being switched off

He indicated that the NASA chiefs would give direction on what would happen after taking the planned oath of office.

“We are going to have the people’s president sworn in. At around one, Hon Raila will have taken oath of office and he will give his speech. We are happy that our supporters have turned up to witness this great occasion,” said John Mbadi.

The opposition had earlier outlined a plan to have a cabinet listing which would run alongside the people’s assemblies.

DON’T MISS: Government and private sector tenders for all