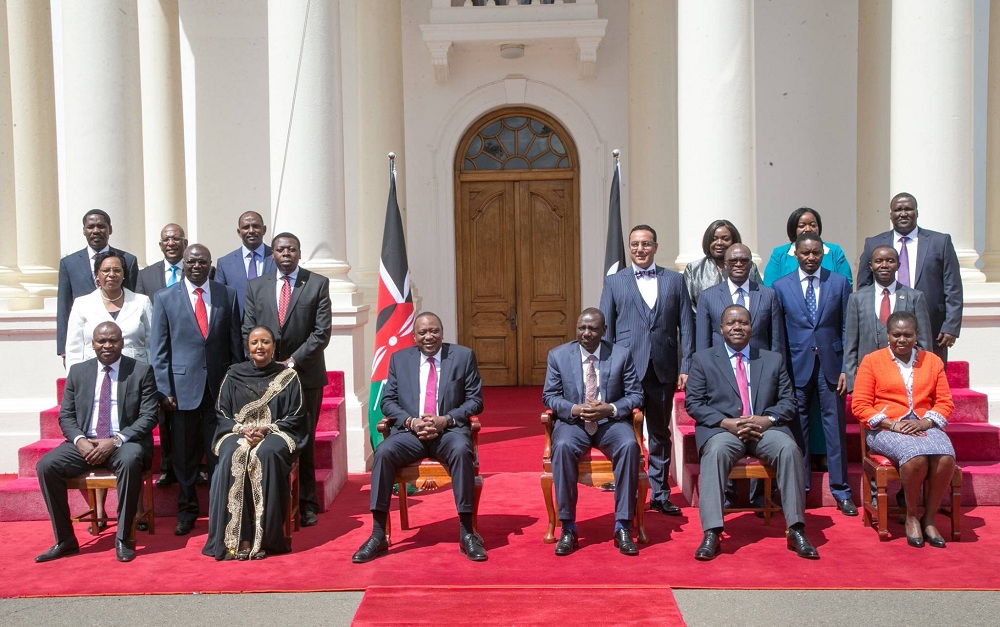 President Uhuru Kenyatta has warned that there will be no room for laxity in his new Cabinet, saying those who fail to deliver will be sent packing.

The President said Kenyans expect and shall receive an open, transparent and accountable Government that is easily accessible, responsive and committed to excellence.

“This might also be the appropriate time to say that should you, at any time, feel the weight is too much, just say so, and we will find another deserving Kenyan to take your place,” President Kenyatta said, adding that his second term will be “business unusual” for those who will not deliver to the expectation of Kenyans.

The President was speaking Friday at State House, Nairobi, after he witnessed the swearing-in ceremony of nine newly appointed Cabinet Secretaries following their approval by Parliament.

Deputy President William Ruto attended the ceremony which was conducted by the Head of Public Service, Joseph Kinyua.

President Kenyatta said he expected his new Cabinet to help in the achievement of the Big Four Agenda that will transform the lives of Kenyans.

“I look towards my Cabinet for selfless service, unimpeachable integrity, dedication to duty and unmatched excellence in bringing into fruition the “Big Four Agenda” – a roof over many more heads at affordable cost, affordable healthcare for all, value addition and manufacturing for jobs, and ensuring that hunger becomes the story of the past,” he said.

He added: “My Government promises to give each and every Kenyan better services and a secure platform upon which, through the sweat of their brow, they can realize all their dreams for a better and more prosperous tomorrow.”

Noting that his first Administration was populated by individuals who helped the Government deliver far beyond its commitments, President Kenyatta expressed confidence that his Second Administration Cabinet is talented, competent, brimming with potential and reflects lessons learnt from the first.

“You are a group of individuals greater than the sum of your parts; made stronger and better by your diversity and varied experiences.  I could not have wished for a better team to help me deliver my solemn commitments to our nation,” the President said, as he congratulated the new Cabinet Secretaries.

President Kenyatta congratulated the Cabinet Secretaries for their appointment and told them that as the guardians of public resources, Kenyans wanted to see their tax shillings being used prudently, resourcefully and for maximum gain for the nation.

He reminded the Cabinet Secretaries that their appointment was a call to servant leadership, to sacrifice, to collective accountability, responsibility and selflessness in order to guarantee growth and prosperity that leaves no Kenyan behind.

“To those whom much is given, much is expected.  High Office is not a platform for self-actualization and pandering to ego; it is a rare calling, a precious honour bestowed on so very few,” President Kenyatta said.

As Head of State and Government, President Kenyatta said he bore on his shoulders the weight of expectation of 45-Million people who have entrusted him with taking the nation towards its destiny and expected the Cabinet Secretaries do play their roles in achieving that goal.