The Government of Kenya has been ordered to pay the Standard Group, Kenya’s second biggest media house, over Ksh7 million as damages following the 2006 raid on its newsroom during which elite police officers carted away computers after setting ablaze the next day’s newspaper edition.

According to a parliamentary report, the raid was ordered by then Internal Security Minister John Michuki (now deceased), the then director of the Criminal Investigations Department John Kamau, and Stanley Murage, who was President Mwai Kibaki’s special advisor.

According to the report, two Armenian brothers – Artur Margaryan and Artur Sargasyan – who had infiltrated the country’s security sector before being deported, were also involved in the midnight operation.

Michuki would later tell journalists that, “if you rattle a snake, be prepared to be bitten by it.” It is believed the government was acting on a tip-off that the newspaper was planning to run a negative story touching on the First Family.

In his ruling dated February 12, 2018, Justice George Odunga directed that Permanent Secretary in the Ministry of Interior and Coordination of National Government pay the applicants Ksh7,125,529.00 with interest thereon at the rate of 12% per annum from January 11, 2017 in terms of the Certificate of Order against the Government issued on January 11, 2017 until payment in full.

The Standard Ltd and its sister company, Baraza Ltd, had moved to court seeking to have the court compel the Interior PS to pay them the damages, lamenting that they have not enjoyed the fruits of their judgement for a period of more than three years.

In their application, they said the court had on March 6, 2006, entered judgement in their favour and awarded them joint global sum of Ksh 5 million in damages as well as the costs of the petition.

Subsequently, the applicants’ on February 12, 2014 filed Party and Party Bill of Costs against
the Attorney General which bill was taxed on September 9, 2016 against the respondents in the petition
including the Attorney General in the sum of Ksh 282,064.00.

READ: Meet the man who missed a KDF chance because he bites his nails

“It was averred that the applicants consequently obtained the Certificate of Taxation on 1st November
2016 and on 11th January 2017 were issued with the Certificate of Order against the Government in the
sum of Kshs 7,125,529.00 inclusive of the decretal sum, taxed costs and interest thereon,” Justice noted in his ruling.

The applicants had told the court that they  served the Attorney General with the Certificate of Order against the Government and demanded for payment of the sum of Ksh 7,125,529.00 within 14 days thereof.

However, the Attorney General has failed, refused and/or neglected to pay to the applicants the said sum of Ksh 7,125,529.00 which in the applicants’ view offends the provisions of Article 47 of the Constitution and section 7(2)(j) of the Fair Administrative Action Act, 2015 which guarantees the applicants expeditious, reasonable and efficient administrative action.

“Similarly, it was contended that the Attorney General has failed to act in discharge of a duty imposed under the Government Proceedings Act, Chapter 40 of the Laws of Kenya as the applicants legitimately expected to be paid by the Attorney General the said sum of Kshs 7,125,529.00 after they served his office with the Certificate of Order against the Government on 23rd January 2017,” the judge noted.

Justice Odunga cited various authorities on circumstances under which an order of mandamus can be issued, concluding that the applicants moved court to compel the satisfaction of a judgement already decreed in its favour by a competent court of law.

“The applicant has not given any reason why the decree has not been satisfied more than three years down the line. If the Court were to decline to grant mandamus, the person who is entitled to payment may be left without an effective remedy despite holding a decree,” Justice Odunga averred.

“In the premises I hereby issue an order of mandamus compelling the Principal Secretary, Ministry of
Interior & Coordination of National Governance to pay to the Applicants the sum of Kshs 7,125,529.00
with interest thereon at the rate of 12% per annum from 11th January 2017 in terms of the Certificate of
Order against the Government issued on 11th January 2017 until payment in full,” he ruled. 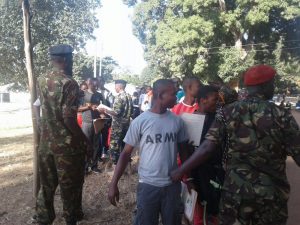