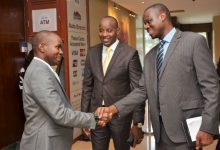 Information, Communications and Technology CS Joe Mucheru is welcomed by the Kenya Union of Journalists Secretary General Eric Oduor and Linus Kaikai, Chairman Editors Guild, when he arrived at a Nairobi hotel, where he was the chief guest during this year's' World Press Freedom Day Cerebrations on Wednesday May 3, 2017.

NTV General Manager Linus Kaikai has declared he has no intention of leaving the station following reports he was headed for the SK Macharia-owned Royal Media Services, which operates Citizen TV and Inooro TV and a host of radio stations.

Sources at Communications Centre, the Royal Media headquarters, had told Business Today on Tuesday that Kaikai was poised to join the media house to take over from Farida Karoney, who is set to join Cabinet after being nominated as the Lands Cabinet Secretary.

RMS is yet to replace her as the Chief Operations Officer, perhaps, because she is awaiting the National Assembly’s approval before being formally appointed by President Uhuru Kenyatta.

But speaking to Kenyans.co.ke, Kaikai denied knowledge of him leaving NTV to join the rival station. “I am not aware of such thing, I’m not leaving NTV. I have no further comment,” Kaikai said, in a short response that appears to speak volumes.

Were he to leave NTV, it will come at a time he appears to have been sidelined after Editor-in-Chief Tom Mshindi appointed Pamela Asigi as the NTV Editor with instructions that she would be reporting to him directly.

Signs of a fallout at Nation Centre emerged when Kaikai’s long-serving secretary was also redeployed to Mshindi’s office.

Kaikai and news anchors Larry Madowo and Ken Mijungu appear to have ruffled feathers after they attempted to air live the mock installation of NASA leader Raila Odinga as the People’s President despite a memo from Mshindi overruling the same. NTV was subsequently shut down alongside KTN News, Citizen TV and Inooro TV.

In the memo, a copy of which Business Today obtained, Mshindi had suggested that the suggested that its reporters cover the event, which he said was illegal, and that the footage would be edited before being aired in its subsequent bulletins.