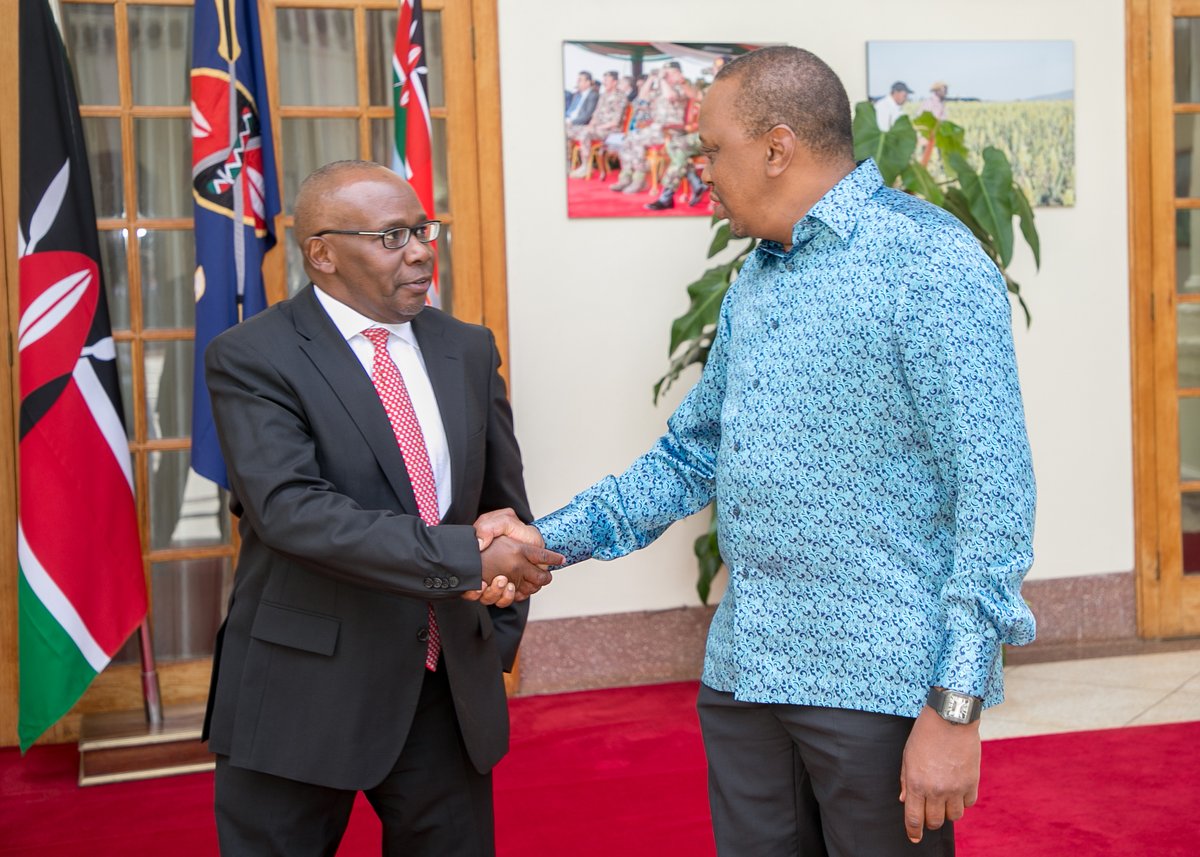 President Kenyatta first confirmed Muigai’s resignation on his Twitter handle and announced he had nominated Justice Paul Kihara Kariuki as his replacement.

“I have received with regret the resignation of Attorney General Prof. Githu Muigai. I thank him for his service for the last six and a half years. I have nominated as his replacement Judge Paul Kihara Kariuki,” the President tweeted.

Uhuru also named Solicitor General Njee Muturi as Deputy Chief of Staff. He will be replaced at Sheria House by lawyer Kennedy Ogeto.

Former MP Abdikadir Mohammed, who has been an advisor on constitutional affairs at State House, has also been nominated as Ambassador to South Korea.

Githu had been retained when the President named his Cabinet choices last month but insiders say it was only a matter of time before he headed for the exit door given that the President did not formally include him in the list. He is known not to have been a favourite in the inner echelons of the presidency, which at times turned to Muturi, a longtime friend of the President, for critical advice and execution of delicate legal tasks such as pushing controversial legislation through Parliament.

However, in an address from State House, Nairobi, President Kenyatta indicated he had voluntarily stepped down and thanked him for his commitment and dedicated service to the nation.

“Fellow Kenyans I have today the 13th of February 2018, received with regret the resignation of Professor Githu Muigai from the office of Attorney General effective the date of the appointment of his successor. I wish to place on record, on my own behalf and on behalf of the people of Kenya, our gratitude for the committed and dedicated service that Professor Muigai has accorded to our nation over the last six and a half years that he has served in the office of Attorney General. I wish Professor Muigai all the very best in the next phase of his professional career,” he said.

“Under the powers vested in me by Article 156(2), I have today nominated the honourable Justice Paul Kihara Kariuki to the National Assembly for approval as our next Attorney General,” the President added.

He said Muigai will remain in office until his successor is appointed.

Muigai holds a bachelor’s degree in Law degree from the University of Nairobi, a master’s degree in International Law from Columbia University School of Law, and was awarded a doctorate degree in law in November 2002.

Prior to to becoming Attorney General, Prof Muigai served in the defunct Constitution of Kenya Review Commission and at the United Nations as Special Rapporteur on contemporary forms of racism, racial discrimination, xenophobia and related intolerance.

He was appointed to replace Amos Wako on August 27, 2011 by then President Mwai Kibaki and was retained by President Kenyatta when he assumed office in 2013.

A staunch Christian, Justice Kihara was first appointed a Judge in October 2003.

Before this, Justice Kariuki had just been appointed the director of the Kenya School of Law, a position that had become vacant after previous holder, Mr Leonard Njagi, was appointed a High Court judge.

Justice Kariuki served in this position only briefly as he was also appointed a judge. He, however, stayed long enough to move the school from its Valley Road address to its present locale in Karen, a situation that delayed his reporting to his new judicial duties.

He is said to have enjoyed close ties with the Kibaki State House.

Ogeto is an alumni of the University of Nairobi having earned a Masters of Law Degree in 2002. He also earned a Diploma in Legal Practice from the Kenya School of Law in 1990 and a Bachelor of Law Degree (2nd Class Honors, Upper Division) in 1989. He is an Advocate of the High Court and is also a Certified Public Secretary, CPS (K).

He has been an advocate of the High Court for the past 24 years with considerable experience in International and Municipal Law and is the Managing Partner in the law firm of Ogetto, Otachi & Co. Advocates which is based in Nairobi which specialises in International Law.

The firm is reputed for being considerably involved in the Defence Team that represented President Kenyatta and other reputable defendants in the case against them at the International Criminal Court, the Hague, Netherlands.

It cites other notable involvements include the Supreme Court petition challenging the election of Uhuru Kenyatta as President, Lead Defence Counsel at the United Nations International Criminal Tribunal for Rwanda – ICTR in Arusha, Tanzania, Co-Lead Defence Counsel at the United Nations Special Court for Sierra Leone for a former Revolutionary United Front (RUF) commander, participated in several international conferences on defence matters and made presentations.