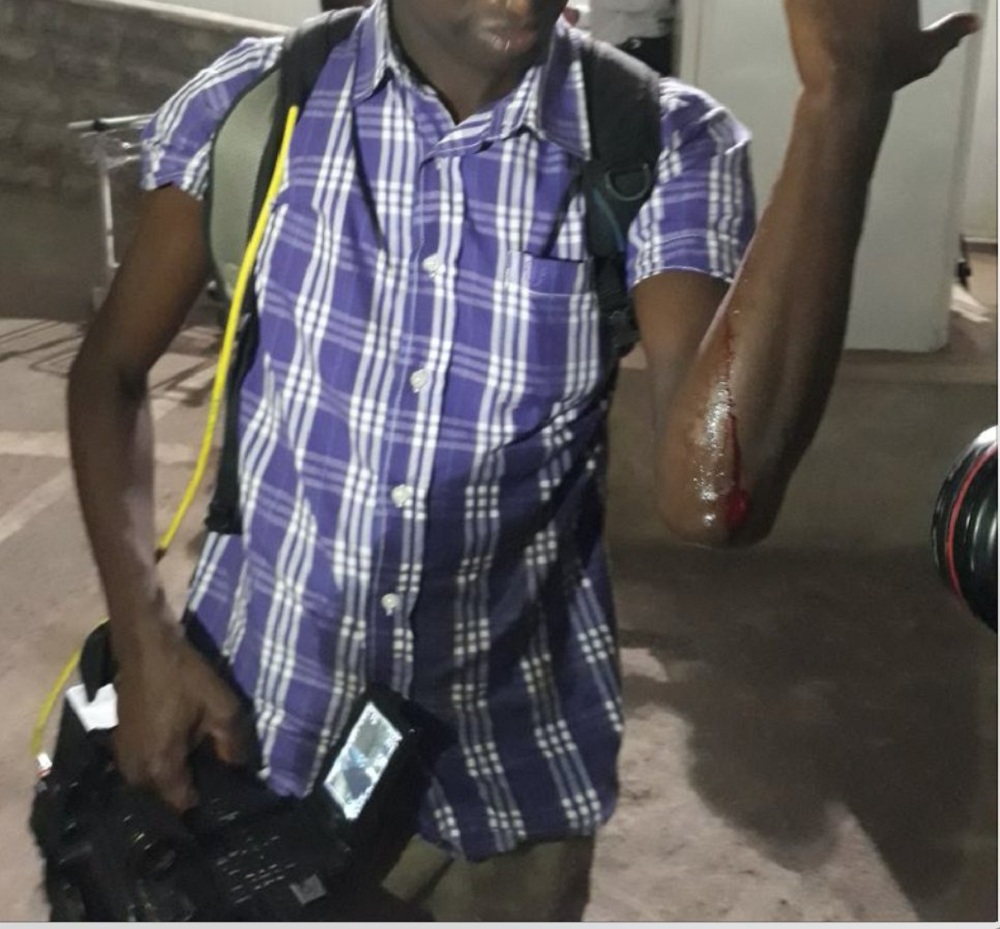 The Kenya Police Service is, once again, on the spot for assaulting and injuring journalists at work — an a****k that has been praised by a State House director.

General Service Unit and plainclothes officers, who were behaving like hired goons, on Monday night attacked TV and newspaper reporters and cameramen as they covered the drama that characterised lawyer Miguna Miguna’s return to Kenya from Canada.

The officers, who were openly unhappy with the media presence as they manhandled and harassed Dr Miguna, turned their anger on members of the Fourth Estate, hurting some.

A General Service Unit officer clubbed him several times as he ran away with his camera.

The officer pursued and kicked the journalist several times before screams from other scribes scared him away.

He was covering the event with reporter Seth Olale when police struck with brute force.

“It is very sad that this is happening to the media in this country,” said Mr Olale.

Also to be beaten was Citizen TV reporter Stephen Letoo as he delivered a live link of the drama at the airport.

Mr Letoo, who complained of abdominal pains, was later taken to hospital.

“I have been discharged from hospital and feeling better now,” Mr Letoo posted on Twitter at 1am.

“The force police used to rough up the Media covering #MigunaReturns was uncalled for.”

KTN News Senior Reporter Sophia Wanuna was slapped by one of the officers in one of the ugliest scenes of media a*****s in the recent past.

In a post titled “Kenyan Police have done well”, Mr Itumbi accused the media of breaching rules by filming at the airport.

” To sum it abit (sic) more bluntly, our economy is far more important than a news item. We cannot allow the broadcast of our Airport in such terms as happened today.”

“They have chased the media like rabbits,” he told an Emirates pilot as he refused to leave with his plane.

He called on media houses to take l**********n against the concerned officers and their commanders.

“Journalists went above and beyond tonight, brought us the story. Cops assaulting them is unacceptable and makes nonsense of GoK commitment to the Constitution. Pole @StevoLetoo. @SophiaWanuna of @KTNNews demonstrated special ‘w*r correspondent’ skills. #MigunaReturns,” he tweeted.

Kenyan media has been under s***e since Jubilee took the reins of power in March 2013.

Mr Kenyatta’s regime first initiated and a Jubilee-dominated Parliament passed several anti-media laws, including the one that slaps hefty fines and penalties on media houses and individual journalists for breaches.

Several journalists were i*****d when goons and police attacked journalists covering the return of Mr Odinga from the West.

And when some TV stations covered his mock swearing-in on January 30, the government descended on them with a sledge hammer, closing four for several days.

This had never happened in Kenya’s independence history.