NTV newscaster Doreen Gatwiri Majala, by dropping an assault case against a parliamentarian, is set to walk away from her marriage to Mwingi Central MP Gideon Mulyungi with a cool Ksh3 million.

The figure is believed to be an out of court settlement so that the NTV Jioni anchor can retreat on her case in which she has accused her politician husband of assault.

Doreen, who has previously accused the MP of beating her to the point of sustaining injuries, is also filing for divorce from the lawmaker, a case that is still in process.

Am somewhere in Kileleshwa now for I don’t know of my safety. Being locked up in the bedroom to be beaten is horrifying…

According to a Twitter feed on Doreen’s account, the former Ebru TV girl had previously stated that she was “horrified” for being locked up in a bedroom to be assaulted.

Doreen, a lawyer having attained her degree from Catholic University of Eastern Africa (CUEA) as well as a post-graduate diploma in Advocate training the Kenya School of Law, is reported to have signed an affidavit that states she was assaulted for apparently dressing indecently in the kitchen.

This is not the first time that Mulyungi is courting controversy, having been involved in implicating his brother, Joseph Mulyungi for theft of CDF cheques.

The lawmaker’s brother was eventually convicted after pleading guilty to the theft of the cheques worth Ksh18,000.

The lawmaker also made the news when his father said that he lost two front teeth when the Mwingi Central MP assaulted him during an argument.

“He rained kicks and blows on me until I fell to the ground in front of his mother and young siblings,” Mulyungi’s father, Mulyungi Kithonga told the Sunday Nation in February 2018.

This episode resulted in the MP’s father stripping naked and walking around Mwingi cursing his son.

“As a parent, I stripped naked to condemn him. I wanted to remind all my children that I am their father no matter what their physical strength or wealth.”

The current revelations could hinge on the fact that if convicted, the first time Mwingi Central MP could be locked up for up to two years, a consequence that would automatically result in the loss of the parliamentary seat.

Mulyungi is an architect, having also been the chair of the Architectural Association of Kenya. He has also represented Kenya at the International Union of Architects.

Doreen, on the other hand, is a former Miss CUEA, having been crowned in 2013. She is also philanthropic, having formed the Doreen Gatwiri Majala Foundation in 2018.

The Foundation involves itself with personal and community charities work and to help enhance education in underprivileged schools. 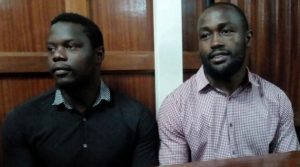 Two Rugby Players Get 15 years for Gang Raping Musician
The musician claimed she became pregnant from the ordeal, adding…