Asigi, who has been serving a one-month notice, left the twin towers on Thursday and is expected to land at Communications Centre on Tuesday. She is set to be named as the SK Macharia-founded media house’s Managing Editor (English), Business Today can authoritatively report.

Asigi was promoted to NTV Editor recently by NMG Editor-in-Chief Tom Mshindi with a caveat that she reports directly to him. Her departure comes at the lead of a staff hemorrhage at its broadcast division that has seen top journalists Linus Kaikai, Larry Madowo and Jamila Mohammed leave while news anchor and host Victoria Rubadiri is also serving notice. She is also headed to Citizen TV.

Kaikai has since been appointed as RMS’ Strategy and Innovation Director while Ms Mohammed is the Managing Editor (Swahili). Madowo left for the British Broadcasting Corporation where has been appointed as the Business Editor for BBC Africa. Rubadiri is set to fill the gap Lillian Muli is set to leave when she proceeds for her maternity leave.

Though Business Today has been privy to her impending departure, news that she has finally left were broken by news anchor Ken Mijungu in a tweet that was apparently later deleted. 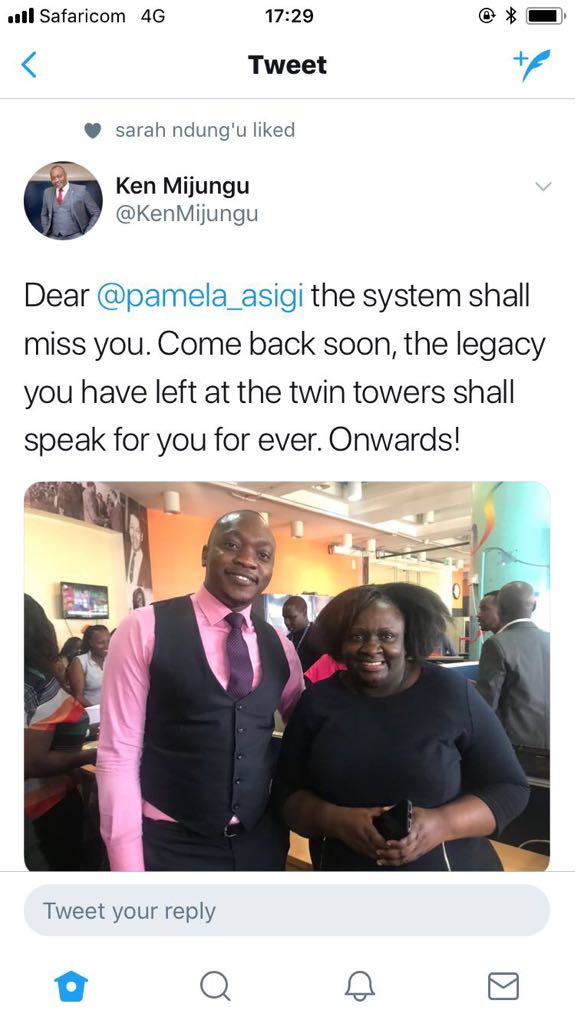 Asigi boasts of over 17 years of experience in television journalism, including  managing reporters, anchors and cameramen. Before being promoted to the position of editor, she was head of news at NTV. She is also an award winning journalist in both health and environment reporting and a CNN Journalism fellow.

READ: Why blogger Cyprian Nyakundi is in trouble with NIS

A holder of a Bachelor of Arts (A***d Conflict and Peace Studies) degree from the University of Nairobi and a Masters degree in Science Journalism from Massachusetts Institute of Technology, she has also previously served as assignments editor at NTV. She is an ardent Manchester United supporter.