Mike Sonko signs the documents to surrender some functions of the county to the national government. Questions abound if the exercise was legal. [Photo/PSCU]

Does Article 187 of the Constitution authorize individuals to transfer functions from one level of government to the other?

This is the question that needs an answer following what is now becoming a debate on the implementation of the constitution and the flagrant abuse to constitutional order.

Doesn’t it authorize governments to transfer functions legally through legislation in parliament and the respective county assembly?

Some Background to the 2010 Constitution

County governments were established under the 2010 Constitution which was promulgated in August of that year under President Mwai Kibaki.

The constitution was cobbled together after the 2007/8 post-election violence in what was meant to be a watertight setting where some areas of the country which had for long been neglected would not feel disenfranchised.

This marginalisation, and the presidency, were largely the bone of contention in Kenya which many pundits attributed to the usual chaotic elections and the deadly outcomes.

With this in mind, the country’s leadership decided to have a constitution which would equalise everyone regardless of where they were. Citizens in Nairobi could be equal to those in Turkana, Wajir and many other places if the ideal of the constitution’s spirit was followed.

In 2013, Kenya’s most expensive election yet happened. Implementing the constitution would be an expensive affair and with the first elections under the new law, there was confusion, largely.

Things were yet to unfurl and Kenyan’s thought that they had found a panacea in the new document which they expected to change things overnight. It did not, however, turn out as expected and Kenyans started questioning the superiority of the constitution as the supreme law of the land. Many areas remained worse off even under the new dispensation where inequalities continued to grow.

With the understanding that the constitution would not make things right, a section of Kenyans have been calling for its amendment coming up with different scenarios and proposals one of which is the Building Bridges Initiative (BBI). Kenyans have been left more fractured by Uhuru Kenyatta and Raila Odinga’s push for the BBI after the handshake risking what could be another chaotic round of electioneering.

With the proposals in the BBI, the constitution has not even been halfway implemented yet changes are already being proposed. And this is where the handover of some functions on the Nairobi county government comes in.

Prior to the 2013 election, the government was of the idea that the Capital City should remain its function but due to the how the constitution structured devolution, nothing of that natured materialised.

Consequently, Evans Kidero was elected the first governor and ran the city down. There were serious allegations of theft and mismanagement of funds by his government and it wasn’t until he was out that he was charged in courted. Cases related to his tenure are still ongoing.

Enter Mike Mbuvi Sonko and the government is in a fix. Sonko bulldozed his way through populism and with an army of followers, Jubilee had no option but to hand him a ticket. However, the ticket was just in the hope that the machinations behind the scenes would see a more suitable candidate occupy the seat to run the city in the sun.

Peter Kenneth, who was seen as being a puppet for Jubilee failed to clinch the seat and so the beginning of a long ride to dethroning the king of bling began.

Behind the scenes, there have been several failed coups at the Nairobi County Assembly but the most successful, yet, was the plan to impeach Sonko as the governor. But going by the happenings on Tuesday, the bling king could have beaten the system halting the march against his office in its tracks.

On Tuesday evening, State House Spokesperson Kanze Dena released a statement stating that the county government of Nairobi had surrendered some functions to the central government.

This is how Rich, Sick Sonko was Freed on Sh15 Million Bail, Barred From Office

The statement read: “In a land mark agreement signed at State House today, Governor Mike Mbuvi Sonko and Devolution Cabinet Secretary Eugene Wamalwa in concurrence with President Uhuru Kenyatta, signed an agreement, handing over functions of the Nairobi County Government to the National Government, pursuant to Article 187 of the Constitution.”

Kanze added that the signing of the agreement was also witnessed by the Speaker of the Senate, Kenneth Lusaka and the Attorney General Paul Kihara.

“The National Government therefore, will take over the following functions of the Nairobi County Government:

The statement noted that the takeover would ensure Nairobi residents receive services efficiently.

“The move comes as a breakthrough in the running of county services that had ground to a halt,” added that statement.

With this scenario then, it has come to pass that the central government has succeeded in doing what was impossible with the nascent constitutional order. Is taking over the Nairobi County functions a threat to devolution in the country? Could it be that the constitutional change is coming as Kenyans watch by the side-lines? Is a Ministry of Nairobi metropolitan in the making?

County governments are established under Chapter Eleven of the constitution.

If Nairobi County has surrendered some functions to the national government, does this mean that Kenyans should expect a new constitutional order?

When the Supreme Court nullified President Uhuru Kenyatta’s election, President Kenyatta in a move to calm an anxious supporter base went to Burma Market where he promised to ‘deal with’ the judges who he described as crooks.

But during the same address, Uhuru gave Sonko a vote of confidence chiding the National Super Alliance (NASA) for branding Sonko uneducated and unfit to hold the office of Nairobi County Governor.

“Our peers dismissed one of our own as a non-starter but they best believe that he is now the duly elected Governor of Nairobi County,” said President Kenyatta.

“We want to turn Nairobi into a city to be admired in a few years you won’t believe whether you are in Nairobi or London,” added President Kenyatta.

As mentioned earlier, President Kenyatta’s camp in the Jubilee Party had reservations with a Sonko governorship but handed him the ticket anyway due to his overriding popularity with voters.

Three years down the line, Nairobi is in shambles, operating without a deputy governor and synonymous with county assembly squabbles.

Service delivery is also crippled. Garbage remains a menace, getting permits for construction is an uphill task while health services in city hospitals leave a lot to be desired.

As Sonko continues to fight graft allegations in court, there are two plausible arguments why Uhuru felt it was necessary to claw back on devolution and take the City from Sonko.

One is that the government wants to micromanage the city and its huge resource portfolio including its equitable revenue allocation and land. Nairobi offers an exciting scenario for shadowy deal makers and cartels.

In the last financial year, Nairobi was allocated Ksh16.9 billion.

Second is that the government genuinely believes that Nairobi is too important to be left in the hands of a clown and would be best suited being more of a ministry than a devolved unit.

A chief executive of a real estate firm told Business Today that President Kenyatta in a meeting with realtors and a host of business leaders this month was at pains to explain why it is so difficult to get approvals from Nairobi County. The President is told to have told the business leaders that he felt left down and would do his best to provide an enabling business environment.

Council of Governors Chairperson Wycliffe Oparanya has described Sonko as a Governor who is now without portfolio after being stripped of all key functions.

Oparanya however observed that it is legal to hand over county functions ‘willingly’ but stated that the county assembly must be involved in such a crucial decision.

It is likely that Tuesday’s announcement gave a sneak peek into the details of possible amendments to the constitution. It is also very likely that in the next general election city residents will not elect a governor, instead, one will be appointed for them.

Whether Sonko will be prosecuted or not remains to be seen but for now, the calamitous Sonko Show at City Hall seems to be over.

Read >> What Kenyans and Jubilee Have Missed in Failed Stadia Promise 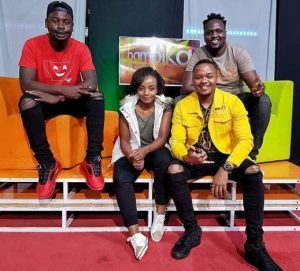