Nairobi Governor Mike Sonko’s decision to nominate Miguna Miguna as his deputy has received mixed reactions with Senator Johnson Sakaja flatly ruling out any chance of the controversial lawyer, who is embroiled in a citizenship row with the Department of Immigration ever becoming the Deputy Governor.

“Miguna will not become the Deputy Governor of Nairobi. Take that to the bank,” tweeted Sakaja Thursday morning as Nairobians were beginning to come to terms with what initially appeared to be fake news.

However, National Assembly Speaker Aden Duale backed the move, saying he would sent him a passport to return to the country as part of the Building the Bridges Initiative spearheaded by President Uhuru Kenyatta and NASA leader Raila Odinga.

“And Miguna will come back so that Kenya can be united. Miguna is a Kenyan and his absence is unpleasant to some. I will sent him a passport to facilitate his return then he can organise a homecoming in Kisumu and elsewhere and then become deputy governor,” he said at a function in Eastleigh, Nairobi.

Speaking on Jeff Koinange Live on Citizen TV, COTU leader Francis Atwoli had this to says when asked whether he was the right man for the job: “I do not think so. There will be a problem.”

Lawyer Donald Kipkorir was philosophical in his assessment, choosing to look at the import of the decision to tap an Opposition-leaning figure, who has a history of being anti-establishment.

“In appointing Miguna Miguna as his Deputy, Gov. Mike Sonko is trodding on History . Abraham Lincoln, America’s greatest President appointed his bitterest rivals to his Cabinet .. Prof. Doris Kearns Goodwin captured it in her book Team Of Rivals .. Sonko – Miguna may save Nairobi,” he tweeted.

Sources close to Sonko says he decided to forward his name to County Assembly Speaker Beatrice Elachi despite being in limbo, adding it is up to her to determine how Miguna will be available for vetting.

There are reports that he is determined not to be influenced by powerful forces in the Jubilee administration in deciding who will replace Polycarp Igathe, who quit in January.

“The Speaker of the County of Nairobi should not second guess the rulings of the Courts . What clarification does the speaker require and from who is is the clarification sought ?” Makueni Senator Mutula Kilonzo Jnr tweeted.

“Congratulations to Dr @MigunaMiguna on your nomination as Nairobi County DG. One thing I like about Gvn @MikeSonko is that he is willing to get things done. He is not afraid to seek help from experts. Take up this chance and fight the cartels!” tweeted presidential aspirant Mwalimu Dida.

Before the elections, however, Miguna had declared he would not serve under him. 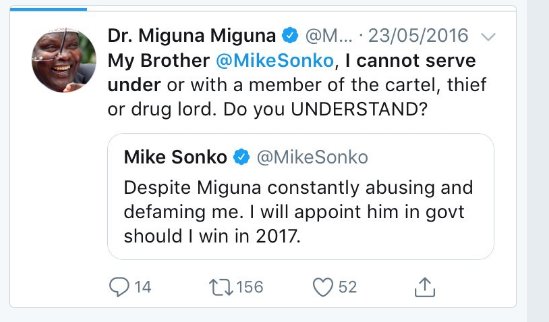 Miguna was scheduled to return to the country on Wednesday but called off the plans after the Immigration authorities declined to issue him with a passport.

“In view of the refusal by the Department of Immigration to issue me with a valid Kenyan passport and facilitate my unconditional re-entry into Kenya as ordered by the High Court and formally requested by the Kenya National Commission for Human Rights on my behalf, and on advice from legal counsel, I have instructed my advocates to immediately bring to the attention of the court the continued willful contempt of its orders,” he wrote on his Facebook page.

“I was determined to arrive home on schedule, however, just before my departure, I reluctantly cancelled my flight to Nairobi and postponed my next arrival date. We will provide you with my new arrival date as soon as the court gives further directions on this matter,” Miguna added.

Here is Sonko’s letter to Elachi: 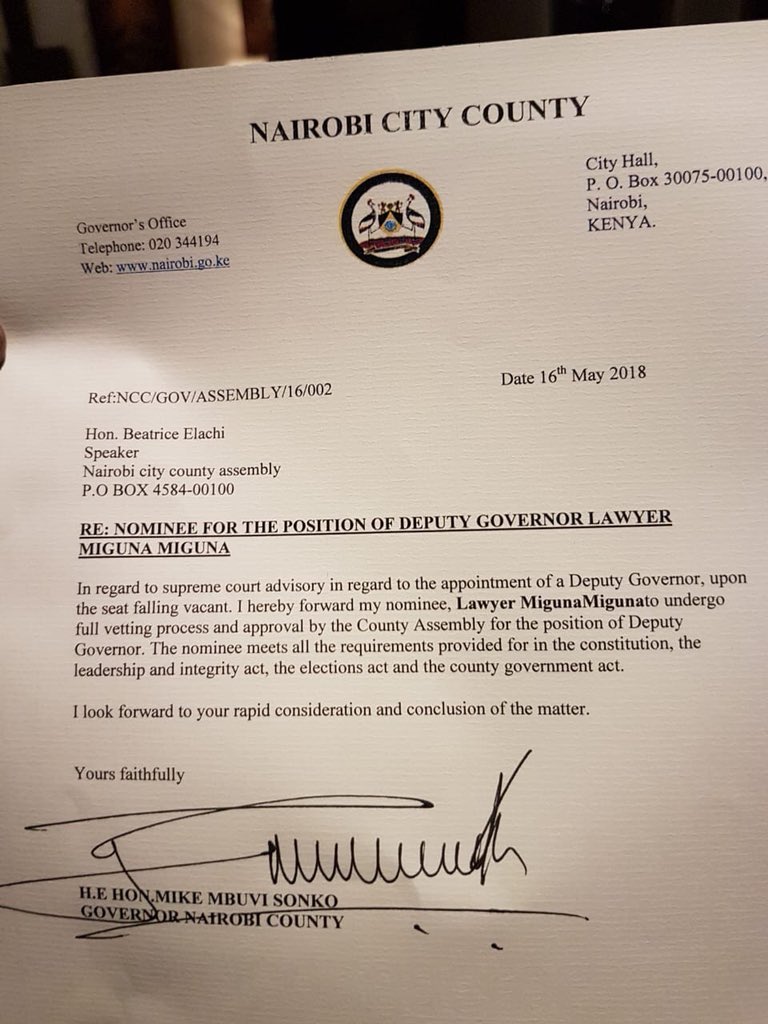