Information that Machakos Governor Alfred Mutua is running for the Mwala Parliamentary seat in the August election is misleading. According to a Facebook post shared on May 23, Mutua, who is serving his last term as Machakos Governor, is to face Mwala MP Vincent Kawaya of the United Democratic Alliance party. 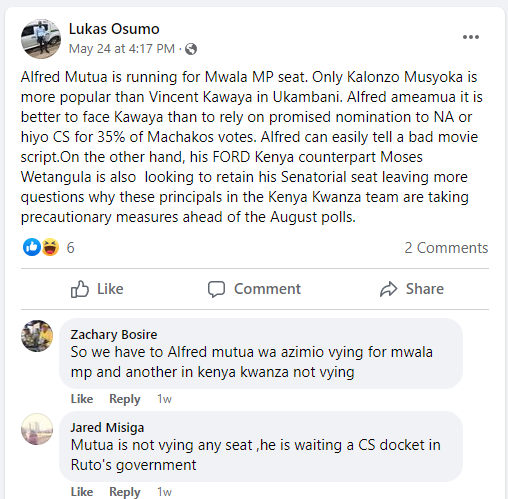 The post was shared by a number of Facebook accounts. “Alfred Mutua is running for Mwala MP seat,” the post announced. “Only Kalonzo Musyoka is more popular than Vincent Kawaya in Ukambani. Alfred ameamua (has decided) it is better to face Kawaya than to rely on promised nomination to NA (National Assembly) or hiyo CS (Cabinet Secretary) for 35% of Machakos votes. Alfred can easily tell a bad movie script.

The post continues to say, “On the other hand, his FORD Kenya counterpart Moses Wetangula is also looking to retain his Senatorial seat leaving more questions why these principals in the Kenya Kwanza team are taking precautionary measures ahead of the August polls.”

Even Daily Nation picked up the information, as did a number of other websites and blogs.

Dr Alfred Mutua responded to the reports that had gone viral on his official Twitter account on 23rd May, clarifying that he will not be running for any elective office in August.

Dr Mutua stated that he will not be running for any elective office in August. “For avoidance of doubt, I wish to clarify that at this particular time, I am not running for any elective position in the forthcoming elections. I am concentrating on campaigning for the Kenya Kwanza coalition so that Kenya can get a new system where dreams can come true,” Mutua Tweeted on the same day.

The governor recently defected from Azimio One Kenya Alliance of Raila Odinga and joined the Kenya Kwanza coalition, led by Deputy President William.

VERDICT: Reports on Facebook that Machakos Governor Alfred Mutua is vying for Mwala parliamentary seat are fake as Mutua has denied having interest in any elective post.