An M-Pesa transaction in progress The mobile money transfer service has been ranked among top 10 financial innovations in the last half decade globally.

Safaricom’s flagship mobile money transfer service M-Pesa continues to be the dominant player in the market almost elbowing its competitors out of business with a 98.8% market share, statistics posted by the Communications Authority of Kenya (CA) show.

According to the sector statistics report, Telkom’s T-Kash, recorded the lowest market share of 0.07 percent with Airtel Money and other service providers in the country settling for 1.13% of the rest of the business.

Speaking to journalists during the 13th M-Pesa Anniversary celebrations in Nairobi on March 12, immediate former Safaricom CEO Michael Joseph reaffirmed the mobile money transfer service’s importance to the organisation’s business saying that M-Pesa continues to be a key contributor to the listed company’s fat profits.

This decline is attributed to the drop in on-net voice traffic from 16.1 billion recorded last quarter to 13.2 billion during the quarter under review.

The huge decline in on-net traffic was occasioned by revision made by Airtel, which resulted in a reduction on its on-net voice numbers by almost half during the period under review.

“The justification provided by the operator was that they had been summing incoming and outgoing on-net traffic in previous quarters instead of providing outgoing traffic only considering that ideally only outgoing traffic is billed,” reads the report.

Similarly, mobile to fixed voice traffic declined by 7.0 percent to record 14.7 million minutes and this decline is attributed to the continued shrinking of fixed network subscriptions.

Minutes of use per month per subscription dropped to 91.5 from 111.2 minutes registered in the foregoing quarter.

The total number of short messages sent during the quarter under review stood at 15.6 billion down from 17.2 billion messages recorded during the previous quarter.

The number of SMS per subscription per month dropped to 95.4 during the quarter under review from 107.6 messages reported during the previous quarter.

Traffic originating from and terminating to other countries increased during the period under review to stand at 144.4 million and 111.3 million minutes respectively.

International traffic among EAC member countries has continued to decline over the quarters following the
implementation of the regional One Network Area initiative which has resulted in decline in roaming voice charges.

According to the regulator, consumers from Kenya, Uganda, Rwanda and South Sudan prefer to roam while visiting either of the countries rather than buying new SIM Cards because of the reasonable calling rates within the One Network Area region.

The volume of SMS terminating in foreign networks declined significantly by 26.2 percent and this is attributed to the high international messaging charges and therefore, most consumers have increased uptake of Over The Top (OTT) messaging services such as WhatsApp. 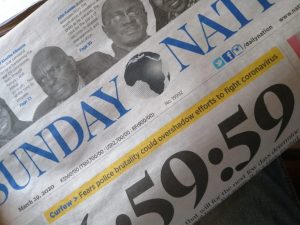