Some of the #SwitchOffKPLC protesters during a demonstration. The Kenyan is threatening the highest echelons of power in kenya to have power bills brough down. [Photo/Trendsmap]

Kenya is a country of conformists who will keep quiet while eating and even when being eaten by the monsters they have created in the name of ‘mtu wetu’.

Politicians and celebrities on the take will do everything in their power to ensure that the status quo remains and anyone who dares challenge this thinking becomes an enemy of the people.

For many, resigning to fate is the easiest way to deal with the pain and trauma borne over decades as the corrupt and politically connected in Kenya continue enriching themselves at the expense of Kenyans.

But sometimes, it takes nothing more than courage to challenge these kinds that ride on the sweat of Kenyans.

The late Prof Wangari Maathai showed us how we can do a small thing regularly until it spawns changes that will benefit generations for years and years.

When it comes to Kenya, very few can muster the strength to say no even when the system is disadvantaging them. This means that no matter how oppressed, like sheep to the slaughter, a majority of Kenyans will keep singing the same song waiting for a saviour.

However, for one Jerotich Seii, the status quo is no way of life where the rich keep getting richer by exploiting the masses while the poor have no one to protect them. In a classic case of belling the cat, Jerotich has taken the reigns of a campaign to make sure that Kenya’s elite respect the rule of law and that they pay for their sins.

For a political class that has been controverting justice since the days of Kenyatta senior, it is hard to make them see that the societal ills they commit are bursting at the seams.

Jerotich has taken the battle to the high and mighty in this country to ensure that a country that prides itself in being on 70% of green energy lives by that very word. Affording Kenyans cheap power, offering good services and ensuring that no Kenyan is in the dark is what Jerotich is seeking.

Jerotich has put Kenya Power under sustained pressure to refund billions illegally taken from Kenyans through a billing scandal that has taken root at the company.

The monopoly power utility has been taken to court and with the #SwitchOffKPLC campaign gaining momentum, the company is seemingly trying to clean up its act albeit missing the point by applying cosmetic changes.

Going for the Jugular

Jerotich wants the thieving systems and those behind them at Kenya Power out to ensure that Kenyans get the value for their money and natural resources.

Despite being let down by some legal team members in a case that was won but the lawyer, Apollo Mboya, opted for an out of court settlement, Jerotich soldiers on. And despite being awarded millions, the lawyer has turned against the cause joining the cabals out to milk Kenyans to death.

Under the #EnergyJustice6 caucus, Jerotich is pushing to have every Kenyan never have to lose a single penny again to theft which we have christened corruption to assuage our egos.

While most Kenyans will gladly turn the other cheek, Jerotich, like Wangari Maathai is again showing us that it can be done. Change for good is possible. And that is why Jerotich Seii ni Shujaa Wetu. 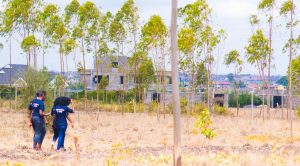