A Standard Group journalist, Otiato Guguyu, was among the winners at the recently held 2018 Pan African Re/Insurance Journalism Awards .

Otiato, a business and data journalist, won the Best Re/Insurance Industry Feature Article for his story, Business of protecting wealth from drought that talks about how an insurance scheme that was introduced in the dry regions of Kenya is cushioning farmers from losses.

The 29-year-old journalist has worked at Nation Media Group’s Daily Nation and Business Daily newspapers and the Standard Group where he is currently working as a business and data journalist. His work includes writing compelling business stories and features specialising in data and analysis of the Kenyan regional and global economic performance.

He is a dedicated Business journalist with experience reporting across a wide range of topics cutting across banking, financial markets, technology, entrepreneurship and corporate governance. He is also a poet and fiction writer, an observant thinker whose greatest strength is in noticing details most people miss and trying to fix them together to tell a story.

Otiato has also cultivated a background in civil society, which have offered wide ranging experience and interaction with the people whom policy and politics affect directly. He has worked for Kituo cha Sheria, Indigenous Fisher Peoples’ network and the Institute of Economic Affairs.

Odimegwu Onwuwere, a journalist with Nigeria’s Africa Prime News has bagged the Pan African Journalist of the Year Award for the 2018 Pan African Re/Insurance Journalism Awards sponsored by Continental Reinsurance.

His winning article titled, Africa emerging new frontier in the reinsurance markets investigates how foreign insurers that once rebuked Africa due to economic instability are now swarming for businesses on the continent because the sector is becoming alluring and dynamic due to unswerving GDP growth.

Adenike Popoola, Chief Correspondent of Nigerian’s The Punch newspaper emerged the winner for Best Re/Insurance Industry Analysis and Commentary for her article, Foreigners taking over Nigerian insurance industry, which discusses how the recapitalisation trend is transforming the insurance industry and its expectations in the future.

At the same time, Gareth Stokes, a seasoned financial journalist working with Commercial Risk Africa (CRA) in South Africa won a special award in recognition of his exemplary contribution to Re/ Insurance journalism and was recommended to become a judge in future editions. Gareth emerged the Pan African Journalist of the Year in 2017 awards.

The winners were announced at a Gala dinner held during Continental Reinsurance’s CEO Summit held on April 9, 2018 in Swakopmund, Namibia.

Speaking at the award ceremony, Dr Femi Oyetunji, Continental Reinsurance’s Group Managing Director noted: “The Pan-African Re/Insurance Journalism Awards are an extension of our continued commitment to advance excellence in the sector. I am glad this year’s entries not only improved in quality, but they also came from a wider range of countries, and with more diverse insurance topics being featured by journalists. We will be including two new categories in next year’s Awards – for broadcast and online entries, and I would like to encourage TV, radio and online journalists to participate.”

The winners were awarded a combination of financial and practical training prizes to include: a fully paid trip to attend the awards ceremony and Continental Re’s CEO summit in Swakopmund, Namibia in April; a cash prize of  $2,000 for the overall winner and USD 1000 for the other two categories and a two-day training on insurance reporting during the awards event and mentorship by Commercial Risk Africa Magazine. The overall winner will also win a fully-paid trip to attend CRA’s training in London, UK including a one-week internship. 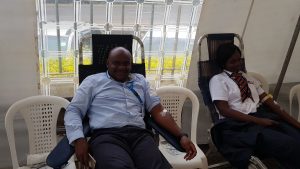 Barclays partners with KNBTS in blood donation drive
This year’s campaign, dubbed 15-to-save-a-life, will run between the 2nd…