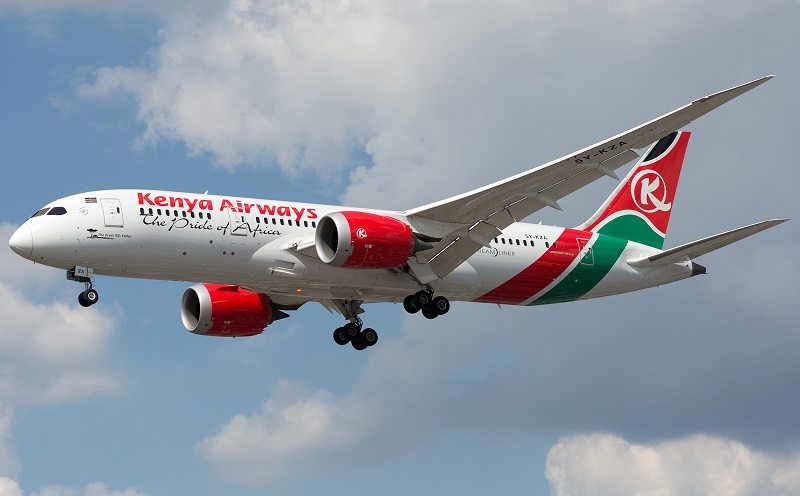 A Kenya Airways plane. The company is planning to sack half of its employees.

National Carrier Kenya Airways (KQ) is planning to ease back passenger flights in September albeit in low volumes to end its revenue conundrum that has left the airline in a precarious financial position.

The September return target is the best the airline could hope for but knows that the passenger flight suspension could run longer than anticipated.

Kenya Airways’ passenger flights were grounded on March 22 leaving the company to count on cargo transportation as its only revenue stream.

“There is reasonable expectation that the flights could resume in the third quarter of the year with business expected to have started at very low capacity and a gradual ramp-up, influenced by gradual lifting of travel bans, uncertain passenger confidence and health safety measures,” KQ says in its latest annual report.

The airline says that discussions with key industry stakeholders are on in relation to safe return to passenger routes. KQ is expected to finance its resumption costs despite applying for a state bailout over its financial position.

“The resumption is expected to happen within the period of the moratoriums already being negotiated with lenders and lessors and thereby allowing the airline to grow back its revenue base and gradually cover its fixed costs,” says the airline.

In May, KQ unsuccessfully applied for the Ksh7 billion emergency bailout with the government opting to stick to nationalization as the best way to lift the company from the red.

Treasury Cabinet Secretary Ukur Yatani said the state bailout plan fronted by the airline’s bosses is a short term fix that will not yield fruit as KQ’s woes go deeper than the Coronavirus pandemic.