Two journalists alleged to have engaged in unprofessional conduct on Friday surrendered their Press Cards to the Media Council of Kenya.

“Yesterday in some social media network there was demeaning photos of the CS in an unknown lodging with a woman in compromising situations. When those went viral Rashid looked for journalists whom he sent the photos and told them to Photoshop and replace them with me and release them online. Because I have acumen on intelligence I was able to round up those journalists with the help of police,” Malala said said at the time of arrest.

The trio were October 26, however, discharged by Chief Magistrate Francis Andai who noted that provisions of the Computer Misuse and Cybercrimes Act under which they had been charged were suspended by the High Court.

They were to be charged with the offense of publication of false information contrary to section 23 of the Computer Misuse and Cybercrimes Act.

They were also to face a second charge of wrongful distribution of intimate images of the senator together with an unknown woman on Facebook.

Ondego and Owiyo, however, appeared before the Media Council of Kenya on October 30, where they admitted engaging in unprofessional conduct leading to the cancellation of their accreditation.

“The Media Council of Kenya has considered your testimony and particularly, your admission that you failed to conduct yourself with professionalism and ethics as required by Section 45 of the Media Council Act 2013 and the Code of Conduct for the Practice of Journalism and has made the decision to withdraw the Accreditation Card issued to you with immediate effect pending further consideration of the matter,” MCK CEO David Omwoyo said in letters to the two.

Here is MCK’s letter to Ondego: 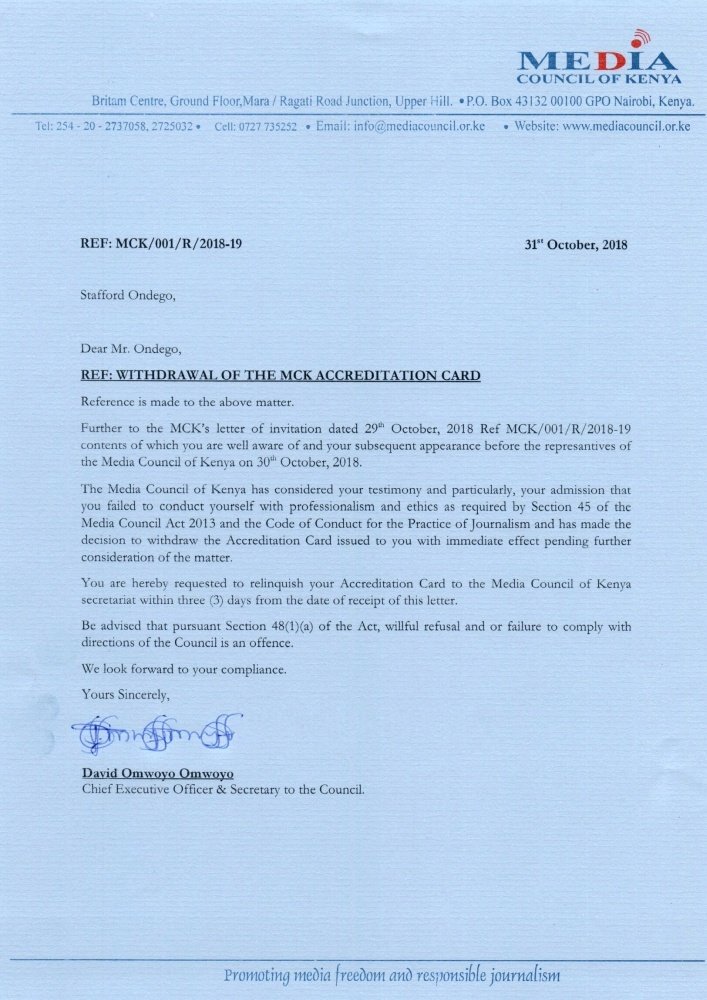 In a tweet, Omwoyo said further action will be taken against the journalists. “Step 1, withdraw Accreditation. Step 2, watch this space,” he tweeted.