Jane Wawira Mugo is a serial criminal is wanted for various criminal activities including robbery with violence, personation and threatening to kill. [Photo/DCI/Twitter]

The Directorate of Criminal Investigations (DCI) is pursuing a woman who has been misrepresenting herself as a top detective.

Jane Wawira Mugo is being sought after a magistrate at the Milimani Courts in Nairobi issued an arrest warrant after the woman failed to appear in court this week.

According to the DCI, Mugo is a serial criminal and is wanted for various criminal activities including robbery with violence, personation and threatening to kill.

In addition, she is said to have been masquerading as the Chief Executive Officer of Trimo Security Limited.

According to the DCI, in the same year, she stormed the office of the victim’s lawyer, detained him and introduced herself as a police officer during which she searched the house and created a disturbance.

Further, she is accused of abducting a Nairobi businessman and locking him up in her office at Baba Ndogo and forced him to pay a debt of Ksh 400,000. She was charged with abduction, personation and creating disturbance. However, all cases were withdrawn under Section 204 of Penal Code.

On December 12, 2016, her employees Isaac Ndirangu, Noreen Malala and Michael Gita robbed a man off Ksh 90,000 which he had withdrawn from a bank after they had introduced themselves as police officers. They were carrying a radio phone, handcuffs and a pistol and were charged with robbery.

In August this year, according to the DCI, while at New Muthaiga Estate, she drew a pistol and threatened to kill a man on allegations that he was spying for a relative of the director in a company where she was the private investigator.

However, one of her previous victims complained that despite reporting her crimes to Spring Valley Police Station in February, nothing happened. She had threatened them with a gun and said no one can touch her. She and her three men had stormed into their house.

A former editor also noted: “This woman has always posed to journalists as a private investigator and has been quoted many times as such.” 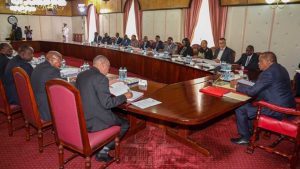 Foreigners Barred from Adopting Kenyan Children After CWSK Saga
At a special meeting held at State House Nairobi, which…