IMF headquarters in Washington DC, US. The institution has provided a Ksh78.3 billion credit facility for Kenya to fight Coronavirus.

The International Monetary Fund (IMF) has maintained Kenya’s debt distress levels rating at ‘moderate’ despite concerns Kenya is heading to the road of economic ruin.

In a policy paper dubbed The Evolution of Public Debt Vulnerabilities in Lower-Income Economies, the global financial institution attributes the reason for the change from low in 2017 to moderate in 2018 & 2019 to ‘ambitious investment plans mainly financed by non-concessional loans’.

Last week, BofA  Securities, a multinational investment bank based in New York in a communique to its investors projected that the Kenyan government would be lining up its fourth Eurobond in the second half of 2020 advising them that Kenya’s debt levels were still within ‘manageable levels’.

And now IMF has toed the same line of thinking pooling Kenya alongside Lesotho as countries which are still creditworthy despite perceptions that they are debt laden.

In the paper, IMF notes that countries with significant debt burdens face a difficult trade-off between scaling up public investment to meet ambitious development objectives and containing debt vulnerabilities.

“Higher inflows of Official Development Assistance, coupled with efforts to boost domestic revenue mobilization and attract more Foreign Direct Investment, can ease this trade-off, but the fundamental tension will likely remain in many, if not most, Lower Income Economies,” reads the paper.

Kenya has been struggling in revenue collection with the Kenya Revenue Authority (KRA) taking the flak for failing to meet revenue targets.

Local economists have since the Jubilee government upscaled its borrowing appetite maintained that global financial institutions specifically The World Bank and IMF have not been painting a true picture of the real state of Kenya’s economy.

Vocal and respected David Ndii has been especially scathing in his assessment of the two institutions regarding their positions on the Kenyan economy under the Jubilee Administration.

As it stands, the stock of public debt stands at Ksh6 trillion while the government in its draft budget policy statement says it wants to borrow Ksh566 billion this year to cover budget deficits. The motivation is to actualise President Uhuru Kenyatta’s campaign pledges before he exits the scene in 2022.

Of the Ksh566 billion, Ksh318 billion will be sourced from the domestic market, Ksh247.3 billion from foreign lenders and some Ksh3.2 billion from ‘other domestic’ lenders.

But the two institutions have been consistent in saying that the debt is manageable despite evidence suggesting otherwise.

“On Kenya’s economy, IMF and World Bank are telling a big, fat lie that will burst,” Ndii tittled one of his pieces while still a columnist at The Nation.

The vocal and respected economist has suggested in different forums including social media that the IMF and World Bank are interested parties in Kenya’s economy and is therefore reluctant to tell the truth about the Kenya’s economy. 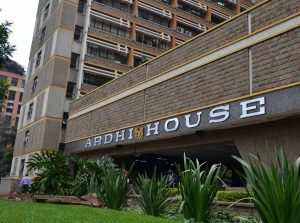 Property Registration Gets Harder but Improves on Construction Permits
In dealing with construction permits, Kenya made the exercise more…