Treasury Cabinet Secretary Ukur Yatani in a past press conference. He has his work cut out resuscitating the country's economy post COVID-19.

BofA Securities, a multinational investment bank based in New York has projected that the Kenyan government will plug its budget deficits through borrowing from international lenders.

The prediction by BofA is not far from the truth. In its Draft Budget Policy Statement, The National Treasury states that it plans to borrow Ksh566 billion to make sure that it has sufficient funds to roll out the Jubilee Government’s ambitious projects.

In the document, Treasury states that of the Ksh566 billion, Ksh318 billion will be sourced from the domestic market, Ksh247.3 billion from foreign lenders and some Ksh3.2 billion from other domestic lenders.

As it stands, the public debt stands at Ksh6 trillion and the American firm has advised its investors that Kenya’s debt “is well within manageable levels”, a position maintained by Treasury honchos Ukur Yatani and Dr Julius Muia.

“Kenya has strong regional and domestic buffers with little need for a precautionary balance of payments facility, but this would help anchor fiscal consolidation efforts and investor sentiment,” the Bloomberg Terminal quoted a report by the investment bank.

For a long time now, the government is also in talks with the International Monetary Fund (IMF) for a standby credit facility that is tailored to act as a cushion for the country’s economy in the event of shocks. The global financial institution has however expressed a number of reservations including the high public wage bill as well as other issues which it wants to be addressed before the financing can be issued.

This will be the fourth Eurobond that the Jubilee is issuing during its eight-year stint in office. The first three were issued in five years.

In May last year, the government secured it’s third USD2.1 billion (Ksh210 billion) Eurobond from international markets which was used to pay the earlier bond.

Most of the proceeds from the first two Eurobonds could not be accounted for and are synonymous with a political storm that ensued over their expenditure.

Orange Democratic Party (ODM) Party Leader Raila Odinga accused the government of embezzling the funds claims which most economists backed up while the government maintained that the money was “used to fund infrastructure projects”. 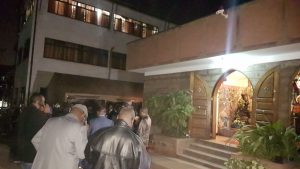