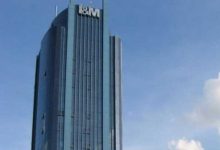 I&M Towers in Nairobi Central Business District (CBD). The group's profits for the nine months ended September 2020 have reduced by 31% to Sh4.6 billion.

Listed lender I&M Bank on Monday reported a 31% reduction in profits after tax for the nine months ended September 30, 2020, to Sh4.6bn compared to Ksh6.6 billion the previous year.

The group’s net interest income fell marginally to Ksh10.4 billion compared to Ksh10.58 during the comparable periods under review.

At the close of September 2020, total shareholders’  equity stood at Ksh63.8 billion from Ksh57.6 billion.

The profit dip, therefore, cut the group’s Earnings Per Share (EPS) to Ksh5.27 down from Ksh7.62 announced at a similar period last year.