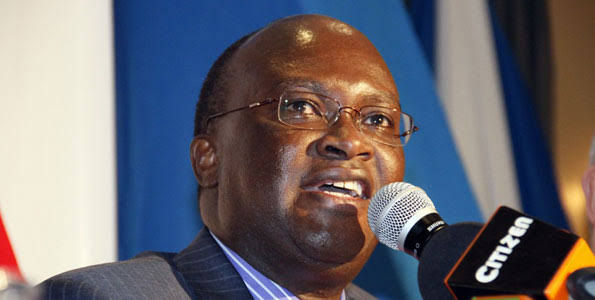 Transport Cabinet Secretary James Macharia. He says there is no diplomatic tiff between Nairobi and Dodoma.

The government was on Saturday forced to clarify that no Tanzanian travelers will be barred from accessing Kenya following retaliation by Dodoma over Kenya’s decision not to name it in a list of nations that will be allowed to operate flights to Nairobi over health concerns.

Speaking while addressing journalists in Nairobi, Transport Cabinet Secretary James Macharia dismissed the “notion” that there is bad blood within the two countries but noted that Tanzania is not yet in the “safe flights’ list.

“Travelers from Tanzania can come in as early as today. We never stopped those flights. This very minor issue has been sorted out and we believe that if not today, by tomorrow we shall find Kenya Airways flying again to Tanzania,” he said.

CS Macharia clarified that the ‘safe flights’ list issued on Friday does not mean that those excluded are banned from operating flights to Kenya.

“It would be inappropriate to start discussing individual countries because we have a total of 180 countries but so far only 19 have been listed as having their travelers exempted from quarantine,” the CS said.

He noted border crossings at Namanga and Malaba for example have been ongoing adding that the government is satisfied with the precautions it has put in place to ensure public health even as Nairobi resumed international flights on Saturday.

Tension has been building between Nairobi and Dodoma after the Tanzania Civil Aviation Authority (TCAA) issued a statement on Friday barring Kenya Airways (KQ) from operating flights to the country after failing to feature in Kenya’s ‘safe list’.

“The Authority regrets to inform you that, on a reciprocal basis, the Tanzanian Government has decided to nullify its approval for Kenya Airways flights between Nairobi and Dar/Kilimanjaro/Zanzibar effective August 1, 2020 until further notice,” the letter read in part.

As part of Kenya’s efforts to control importation into the country, passengers jetting into Nairobi will be required to produce a PCR based COVID-19 certificate whose test should have been administered 96 hours before travel.

“Let it be clear that those who will have a certificate of tests done before the stipulated 96 hrs will not be allowed to board in the first place. On arrival the passengers’ temperature should not exceed 37.5 degrees and not display any COVID-19 related signs,” CS Macharia said in a press briefing earlier during the week.