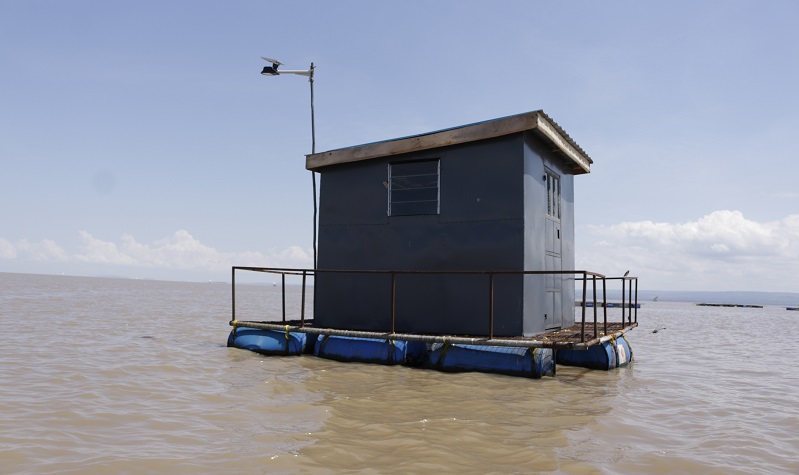 A sentry box at Dunga Beach in Lake Victoria. Cage fish farmers have engaged a sentry to guard their investment. Photo / GEOFFREY KAMADI.

[dropcap]I[/dropcap]t began as a solution to the plummeting fish populations in Lake Victoria, but the growing popularity of cage fish farming is now posing environmental problems of its own. The practice could be harming the lake’s ecosystem due to the lack of guidelines to regulate it.

Cage fish farming entails installing steel cages inside the lake, which are suspended by floats. Feed is provided to the trapped fish, which are constantly monitored. They are harvested when mature.

Realisation of harmful effects have prompted  concerned authorities to come up with guidelines, whose formulation is now in the final stages. The process is spearheaded by the Lake Victoria Fisheries Organization (LVFO), which coordinates fishing activities in the riparian countries.

“This is something that could negatively impact other forms of aquatic life including other fish species,” says Dr Chris Aura, Assistant Director of Freshwater Systems Research at the Kenya Marine and Fisheries Research Institute (KMFRI), Kisumu Centre.

The government promoted cage fish farming to address the diminishing fish stocks in the Lake – especially the tilapia species – whose shrinking numbers can only be described as catastrophic. Boosting fish populations would see an improvement of the fishermen’s economic prospects, which have suffered as fish numbers declined.

Available KMFRI’s data point to a precipitous decline in fish. In 1991, there was an estimated 46,941 metric tonnes of tilapia in the lake. In 2015, the population had collapsed to 3,203 metric tonnes, representing a whopping 93% drop, in less than three decades. The country now imports tilapia from China, something unimaginable in the 1990s.

Despite importing fish, Kenya’s per capita fish consumption of 3.7kg per year remains well below the 20kgs recommended by World Health Organisation.

Mr George Opande, who used to go out fishing overnight in a sailboat, has fully embraced the concept. “We realised that it became increasingly difficult to catch fish in the open waters because they were becoming scarcer, so we decided to engage in this (cage culture) method of fishing,” says Mr Opande, who hails from Nyalenda village, of Kisumu County.

There are many advantages associated with the practice, as far as he is concerned. For one, he explains that the method gives the fish enough time to breed and mature, something which cannot be said of the traditional method. “As we harvest mature fish from one cage, others are breeding and growing up in other cages, so there is zero chance of catching immature fish, hence we do not interfere with the next generation,” he says.

Mr Opande is one of the 123 members of the Dunga Fishermen Cooperative Society, set up to cater for the welfare of the fisher folk on Dunga Beach of Lake Victoria. The society first experimented with the cages in 2011, having been advanced a loan of Ksh2.1 million ($21,000) from the Coop Africa Foundation.

“Fish reared in cages have a natural taste much like the ones caught in the open waters, compared to, say, those reared in ponds,” says Mr Joel Otieno Otieno, the chairman of the cooperative society.

They own 13 cages, which can accommodate between 5,000 and 10,000 fish each. They have gone as far as putting up a sentry box on a floating but anchored foundation, smack in the middle of the lake, complete with a flood light to guard their investment.

As of December 2017, there were about 3,700 cages, up from only four in 2013 in the lake. They are owned either by individuals or groups, which Dr Aura refers to as farms. In total, there are 43 farms owning cages in the lake. A farm can own more than one cage.

Based on the research institute’s calculations, on average for instance, a farmer makes about Ksh100,000 ($1,000) a month. In addition, there has been increased tonnage in terms of production. By the end of 2017, production from the cages amounted to $8 million.

But cage fishing’s wave of popularity has come with problems. The recommended depth for placing these cages is 10 metres (33ft) or deeper. And the location of the cages ought to be properly demarcated, maintains Dr Aura, so  they do not interfere with breeding sites, hence the fish progeny.

“However, unscrupulous fish farmers are known to install cages in depths as shallow as 6metres (20ft) or less,” says DrAura.

Placing the cages at great depths, he explains, encourages maximum water exchange. This promotes large supply of dissolved oxygen, otherwise the fish will asphyxiate. “Some farmers put so many fish in the cage whose depth is shallow, so the fish end up competing for space and oxygen, resulting in too many fish dying of suffocation,” he says.

There is also concern that farmers are using feed that enriches water with nutrients, hence encouraging the growth of marine vegetation. “They use fast-sinking fish feed instead of floating pellets, which may accumulate on the lake bed, encourages the growth of aquatic plants such as algae which competes with the fish for oxygen,” he explains.

SEE: HYACINTH IS WORTH BILLIONS – KSH225 PER KILO

At another level, these farmers are required to monitor water quality periodically, something which does not happen often. In addition to coming up with cage fish farming guidelines, KMFRI mapped the fish breeding and nursery grounds, to indicate suitable locations for installing cages.

This has also seen the drafting of the Fisheries Management and Development Act. It will assist with policing fishing activities by enforcing the guidelines.

Geoffrey Kamadi is a freelance journalist based in Nairobi, Kenya. He can be reached at email: [email protected]