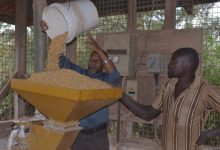 Scientist Simon Mwaura, who is the CEO of Hyaquip, grinds a mixture of hyacinth, reeds and coffee husks in Maragua. PHOTO / KNA

Aquatic weeds, including the much dreaded hyacinth, are key components in making of organic fertilizer used in arid and semi-aid areas. Mr Simon Mwaura, a scientist based in Murang’a and CEO of Hyaquip Kenya, has discovered a niche that could ignite a scramble for hyacinth ravaging Lake Victoria.

He says there’s growing demand for aquatic weeds, which are used as raw materials in the manufacture of organic fertilisers for countries that experience desert-like conditions. The fertilizer is suited for dry conditions as it has capacity to hold water for long and is very effective with drip irrigation.

Export of hyacinth, if sustained, will be a solution to the fishermen among other users of Lake Victoria. A kilo of processed raw materials from weeds is currently going for Ksh225, which is more than what farmers get from tea and coffee, he said.

Mr Mwaura, who has patented the hyacinth processing machine, said Hyaquip Kenya would engage people from Lake Victoria and other areas where hyacinth has posed a problem and train them how to dry and grind the plant for marketing.

Speaking in Maragua on Tuesday, where he demonstrated how to make the organic fertilizer using the weeds, Mr Mwaura said he has secured a contract with United Arabs Emirate (UAE) to supply organic materials. Hyacinth and reed have posed a big challenge in some water bodies in Kenya including Lake Victoria. Locals can take advantage of the plants to generate revenue instead of destroying them.

“People living near areas where hyacinth is common should start harvesting, drying and selling it to companies that can use them to make organic fertilizer,” added the researcher.

The organic material from aquatic weeds is mixed with other materials including maize cobs, rice and coffee husks, banana stalks and coffee pulp to make the fertilizer. This industry is estimated at Ksh2.5 billion annually, Mr Mwaura said.

The water hyacinth, that beautiful green floating weed with pink flowers, is the bane of the lacustrine communities that derive their livelihood from Lake Victoria. From hampering fishing activities to crippling water transport, the weed is seen as the biggest problem besetting these communities.

So big a problem it is that counties bordering Lake Victoria – Kisumu, Homa Bay, Migori, Siaya and Busia -have bought a water hyacinth harvester to be used to produce energy and manure.  The machine can harvest 150 tonnes of hyacinth a day.

Great idea? Scroll down and leave your comments