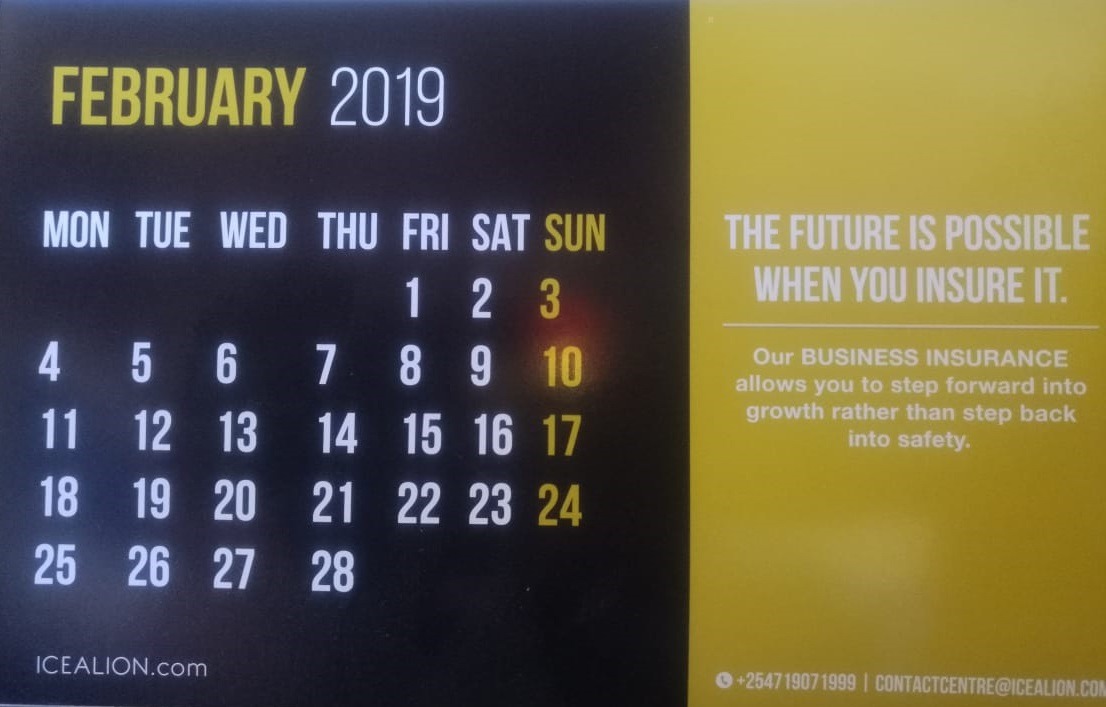 February, the shortest month of the year, has gone by in a flash. It is such a unique month as it features Valentine’s Day, the Chinese New Year and seen in Kenya as the buffer zone from the much-maligned January for its economic hardships – but with the fewest days than the other 11 months of the year.

February is also the only month of the calendar that, once every six years and twice every 11 years consecutively, either back into the past or forward into the future, has four full seven-day weeks.

February usually has 28 days, except leap years when it has 29. The next leap year is in 2020, in case you were wondering. Those unlucky enough to be born in a leap year, and worse so on February 29th, have to wait for four years to celebrate their birthday. Now you know their next celebration and there’s enough time to prepare for it.

Just why does February have only 28 days?

Prior to the Gregorian calendar, which is currently being used, the Romans under Romulus, the First King of Rome, came up with their own calendar that had only 10 months. Early Roman calendars only ran from March to December. The part of the year we now know as January and February was left out – probably because it had little or no importance for the harvest because of the winter-time.

To sort this mess, the second king of Rome, Numa Pompilius (715-673 BC) aligned the calendar with the lunar year – filling in the gap. However, this got pretty messy in itself as he initially made January and February both 28 days long, but then changed his mind as even numbers were considered unlucky at the time.

No one knows why February was left with 28 and remained an unlucky month. It may be related to the fact that Romans honored the d**d and performed rites of purification in February. (The word februare means “to purify” in the dialect of the ancient Sabine tribe.)

The 355-day calendar couldn’t stay in sync with the seasons because it didn’t account for the amount of time it took for the Earth to orbit the sun. So, an extra “intercalary” month of 27 days was inserted after February 23 every couple of years or so to even things out. The pontiffs who were in charge of calendar upkeep didn’t always add the extra month on schedule. (Some officials took advantage of the system to extend their time in office, for example.)

This calendar was ditched by Julius Caesar around 45 BC when he stuck an extra 10 days onto the calendar year and added an extra day in February every four years.  Indeed, it was Julius Caesar who invented the leap year! This new format got the calendar year a lot closer to the actual time it takes for Earth to orbit the sun (as it was based on the sun rather than the moon). This became known as the Julian calendar (after Caesar) and the Gregorian calendar (named after Pope Gregory XIII) was a reform of this, brought in in 1582.

In around 45 B.C., Julius Caesar commissioned an expert to put aside the lunar origins of the Roman calendar and make it sun-based, like the Egyptian one.  (The leap-year day was inserted after the 23rd, the same time as the old intercalary month.) Now, the year averaged out to 365.25 days, very close to the actual average length of a year: 365.2425 days (and even that varies).

Read Also: 20 things we use daily that are dirtier than toilet seats

Some have speculated that Caesar added a day to February when he reformed the calendar — making it 29 days long.

The story goes that when the Senate renamed the month of Sextilis to honour the emperor Augustus, that day was subtracted from February and added to August in order to make it equal in number to July — the month named for Caesar. But this theory is now believed to be bunk; it’s likely that Caesar never even added a day to February.

The Only ‘Mad Woman’ Who Defied Moi

The menace of making a reverse call back in the day