Mary Wangari Wamae. She has been appointed as Equity Bank Group Executive Director.

Industry watchers are interpreting it as a pointer to the lender’s succession strategy to prepare her to take over from Equity Group Managing Director and CEO Dr James Mwangi.

While running her private legal practice before joining the bank, Mrs Wamae was the team leader in facilitating the first strategic investment in Equity Bank by AfriCap Microfinance Fund in 2002. She has led the Group in several strategic projects, including the conversion from Equity Building Society to a commercial bank in 2004; the listing on Nairobi Stock Exchange in 2006; private capital raising of US$185 million new equity by Helios EB Investors in 2007 to become anchor strategic shareholder; setup of greenfield operations in Tanzania, South Sudan and Rwanda as well as the acquisition of existing banking operations in Uganda and more recently Democratic Republic of Congo (DRC); and subsequent listings on Uganda Securities Exchange (2009) and Rwanda Stock Exchange (2015). Mrs Wamae is also credited with setting up the legal and secretarial division of the bank.

Mrs Wamae’s new role will include overseeing the management of the Group’s banking subsidiaries in DRC Congo, Rwanda, Uganda, Tanzania and South Sudan.

She holds a master’s degree in Leading Innovation and Change from York St. John University, UK, and a Bachelor of Laws degree from the University of Nairobi. She is also a graduate of the Advanced Management Programme (Strathmore – IESE Business School, Barcelona Spain). Mrs. Wamae is an Advocate of the High Court of Kenya with 14 years private legal practice experience.

Prior to her promotion, Mrs Browne worked as the General Manager for Legal, Corporate Banking at Equity Bank. She is a Chevening Alumna who holds a Master of Laws from UCL – University of London. She joined the bank in 2014 after a six year stint as principal counsel at East African Development Bank. She is an accomplished legal practitioner and has previously worked at The World Bank and the Industrial Promotion Services (K) Limited (IPS).

Malahay has worked at the Group since 2016. He holds a Master’s degree in Economics and a Bachelor of Business Finance from the University of KwaZulu-Natal, South Africa. Mr. Malahay has over 14 years’ experience in financial services with competencies ranging from commercial banking to credit ratings, investment banking and fund management. He has previously held several high-level positions at global financial institutions, notably Standard Bank, Fitch Ratings, J.P. Morgan and Investec Asset Management.

Speaking on the promotions, Mwangi said: “These promotions and recent appointments affirm Equity Group as an equal opportunity employer. The Group’s organisational structure is evolving to match the transformation of Equity Group and the complexity of its regional operations.”

“We are reorganising the structure in line with the Group’s growth as reflected in the capital base, asset base and client base in response to the funding and infrastructure capability as well as to reposition ourselves for opportunities that will open up from the anticipated growth locally and in the region,” added Dr Mwangi. 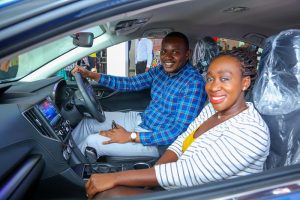 Youngman who drinks Smirnoff wins Subaru
More than 680,000 people participated in the second edition of…