The 2019 Sports Man of the Year, Mr Eliud Kipchoge, poses for a photo with his trophy during the SOYA annual gala held at the weekend. [ Photo / Ogilvy ]

Marathon World Record holder Eliud Kipchoge was crowned the overall Safaricom Sports Personality of the Year at the 16th edition of the awards held at Mombasa Sports Club on 25th January 2019.

“This is the second year in a row that I am being recognized and I can’t take this for granted. Sports is the only way to unite not only the country but the whole world and I urge everyone to love sports and support our sportsmen and women.”

In the other categories, the national women’s volleyball team Malkia Strikers scooped the Women Sports Team of the Year Award with Kenya Lionesses (Rugby) and Harambee Starlets (Football) emerging second and third respectively.

National women’s volleyball team coach Paul Bitok was crowned the Coach of the Year after beating David Ouma of the Harambee Starlets, Carey Odhiambo of Morans and Curtis Olago of KCB RFC.

This is the 16th year that Safaricom has been the title sponsor of the Sports Personality of the Year Awards (SOYA), which recognize the outstanding talents of Kenya’s sports personalities.

Overall Sports Personality of the Year

Sportsman of the Year

Sportswoman of the Year

Sports Team of the year (Men)

Sports Team of the year (Women)

Coach of the Year

Sports Federation of the Year

Sportsman of the Year with Disability

Sportswoman of the Year with Disability

Most promising Personality of the Year (Girls)

Most promising Personality of the Year (Boys)

School Coach of the Year:

School Team of the Year (Boys):

School Team of the Year (Girls) 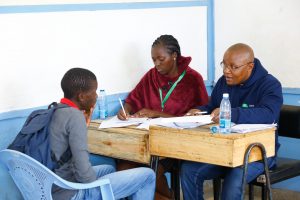