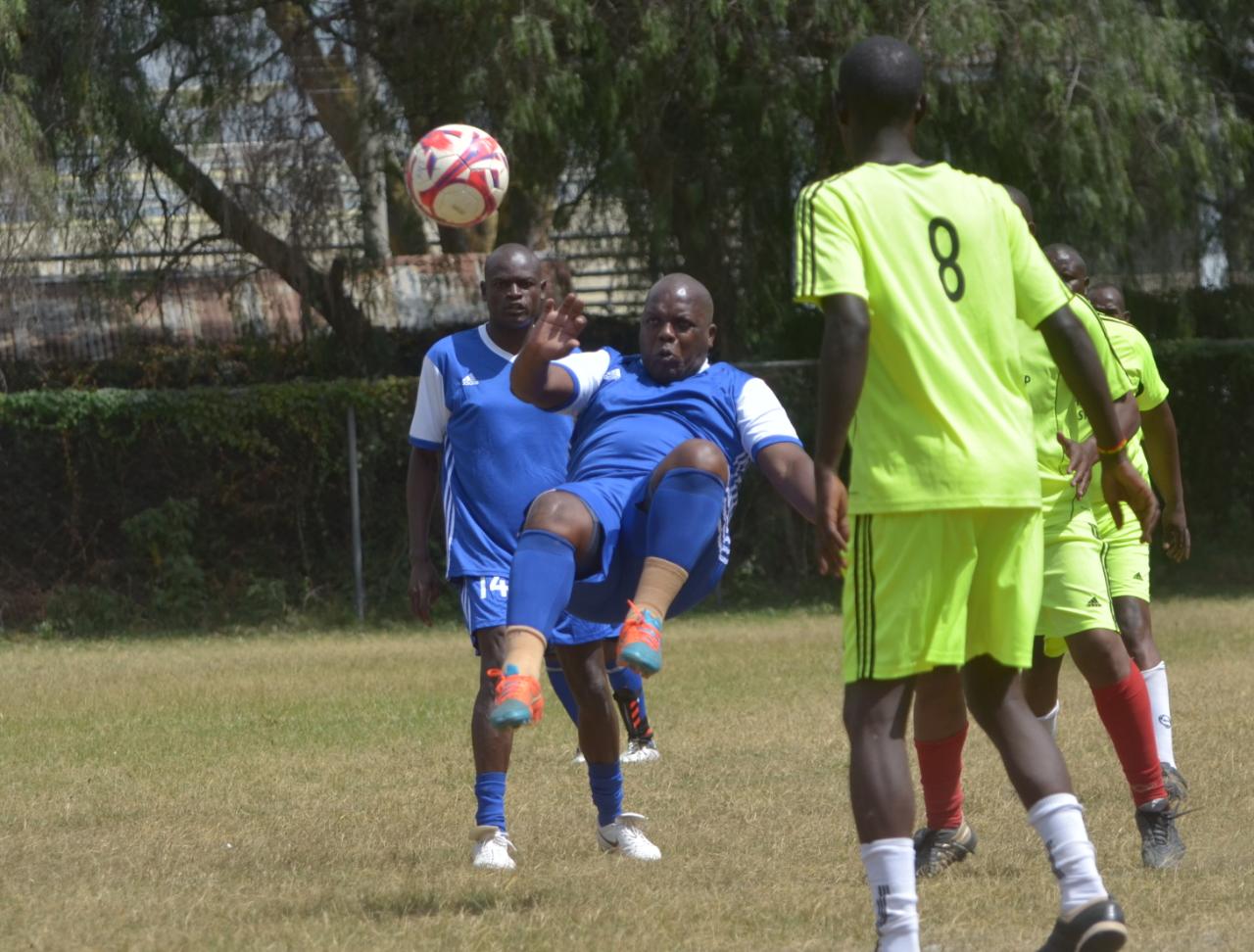 [dropcap]E[/dropcap]lias Makori likes talking about himself and letting the world know what he’s up to. Recently, he shared a photo on his Facebook page while airborne executing the often-exalted overhead kick, popularly known in rural soccer as ‘orthodox’.

That photo attracted lots of hilarious comments from his friends and fans, with some shuddering to imagine how he landed on the ground after that daring move during a friendly match between Nation Media Group and Longonot Horticulture in Naivasha, given his not so mean body frame.

“I landed as smoothly as a KLM Airbus A380 at Schipol,” he said, half-jokingly.

On the pitch, Makori, now 47, was perhaps practising was he has been writing about for two dozen or so years as a sports journalist.

Today, as Managing Editor in charge of sports at NMG, he is looks back at 25 years of journalism working for Nation, the region’s largest media house which he joined when he was just 22 years old.

“Today, I dedicate myself and offer my gratitude to the Almighty God as I look back and celebrate my Silver Jubilee as a wordsmith at Nation Media Group (1993-2018),” he says. “Working for 25 consecutive years for the same employer (more than half my life) isn’t easy. There are numerous challenges, triumphs and disappointments, in equal measure, that come along the way.”

In a fluid media industry where journalists are always nosing around less for new than for greener pastures, Makori’s staying power at NMG easily puts him among the longest serving employees in editorial. The others are Henry Owuor who at 29 years, according to sources, is the longest serving staffer. Larry Ngala has done close to 40 as a correspondent, while Eric Obino had done 25 years until his recent departure.

“What has held me is the fact that I always focus on delivering on my journalistic calling and raising the profile of the Kenyan sportsman and woman,” he old Business Today.

“I always fight for sports journalism to gain recognition both in the newsroom and globally. Also, steering clear of media politics helps.”

On the sports desk, he served under John Nyamu, Dick Aguda and Fred Waga before ascending to the position and later being elevated to managing editor. On his Facebook page, he pays tribute to his seniors at the desk, including Gishinga Njoroge, Johnny Pewa (RIP), Joseph Olweny, Stephen Ongaro and Larry Ngala among others.

“I also hold special respect and honour for Kenyan sportsmen and women, without whom I wouldn’t have built my brand. They always give us something positive to write about and to celebrate. They make Kenya a great country,” he adds.

READ ALSO: Kenyan journalist lands big job in the US

He said he had his fair share of experience as treasurer of Kenya Union of Journalists (KUJ), but discovered he was meant for the action on the field, not the sideshows. “My passion is also to nurture upcoming journalists. While in Eldoret, I had a good stint giving talks to students at Moi University and I’ve done lectures on Sports Journalism in the Netherlands, Tanzania, London, Addis Ababa, among other locations,” he says. “I love seeing sports journalism grow.”

His longevity means he has had to do something that many journalists have failed to do at NMG: cheat the near-annual retrenchment scalpel, many times.

At some point, Makori was deployed to Eldoret Bureau where he served as regional editor for three years before coming back to the head office in Nairobi. Many in media thought he was on his way out, as bureaus are oft-times used as fattening grounds before the guillotine falls.

“In life,” he says, “we shouldn’t take some landmarks for granted. God is great.”

Below are excerpts from the interview with Business Today.

BT: Someone would ask, how have you managed to clock 25 years at NMG?

MAKORI: The fact that I’ve survived many retrenchments is perhaps due to my continued and sustained fight to grow the sports journalism space.

BT: What inspires you in your work as sports journalist and more so as an editor?

MAKORI: Well, there’s nothing that excites me as much as seeing sports journalism in Kenya grow. The traditional career growth path in newsrooms has been so limited because only a few can be MEs. The fact that NMG created the position of Managing Editor (sports) to me has been the highlight because previously, career growth in sports wasn’t rewarding enough and to be an ME, one had to switch to news and elbow one’s way up.

BT: That sounds like a milestone for both you and NMG itself, right?

MAKORI: That I’m Kenya’s first Managing Editor (Sports) offers hope to many upcoming sports journalists and is a plus for NMG.

BT: How is convergence turning out at the sports desk?

MAKORI: The converged sports desk is a good development where print, broadcast and online sports platforms are under one desk. It creates good all-round sports journalists.

BT: What are some of the high moments during the past 25 years?

MAKORI: The highlight of my career so far at NMG was being named the World Journalist of the Year by the IAAF in 2012. So far, no African journalist has achieved this. The International Association of Athletics Federations (IAAF) has been using me as a special adviser on media issues as part of the IAAF Press and Media Operations Advisory Group. This is a good reflection on Kenya’s sports media. I’m happy to see the growth of sports journalism in Kenya, punctuated by the many awards Kenyan sports scribes have won over the recent years.