The Directorate of C******l Investigations (DCI) has launched investigations into the source of the suspicious letter directed to Attorney General Paul Kihara, which is alleged to have originated from the Office of the President.

The letter signed by Justus Nyamunga, the Secretary, Budget and Policy Strategy, sought to initiate a political process to end the standoff that has seen enactment of the Division of Revenue Bill and the County Allocation of Revenue Bill to allow for release of funds to counties.

Members of the National Assembly and the Senate sharply differed over the amount of money to be allocated for county governments.

According to State House, the letter is not genuine and does not represent the views of the President. The Standard reported on Thursday of a tiff had erupted between aides of President Uhuru Kenyatta and Ruto.

The advisory, which is printed on The Presidency letterhead and dated July 3, had asked the AG to take a political approach to resolve the matter. It indicates it was authored on behalf of the Executive Office of the President, Chief of Staff and Head of Public Service.

“The purpose of this note is to bring this matter to your attention and request withholding of gazetting of the said Warrant Authority and to urgently initiate a political process to have the Division of Revenue Bill and County Allocation of Revenue Bill enacted into law so as to operationalise the funds under articles; 204, 206 and 207, empower issuance of Warranty Authority and enable the Controller of Budget to authorise withdrawal in accordance with Article 228(4) of the Constitution,”  it reads in part.

“The above mentioned letter which is already in public domain refers, which allegedly originated from Secretary, Budget and Policy Strategy and signed by one Justus Nyamunga addressed to the Office of the Attorney General for the attention of one F. Mwachi. This is to confirm that the DCI is investigating the authenticity and genuineness of the said letter as it is believed to have been fraudulently made without concerned authority,” reads a statement signed by John N. Kariuki on behalf of DCI Director George Kariuki.

Under the budget, counties were allocated Ksh 310 billion instead of Ksh 335 billion that the Senate was pushing for

Though President Uhuru has signed the Appropriations Act, funding of counties remains in limbo as the Division of Revenue Bill is yet to be passed.

However, Ruto has promised that the government will publish a new Bill to increase county allocations to Ksh 316 billion by reorganising national government allocations.

Read: Switch TV bit more than it could chew

Both senators and governors are in court to challenge the manner the shareable revenue issue was handled by the National Assembly.

Here is the controversial letter: 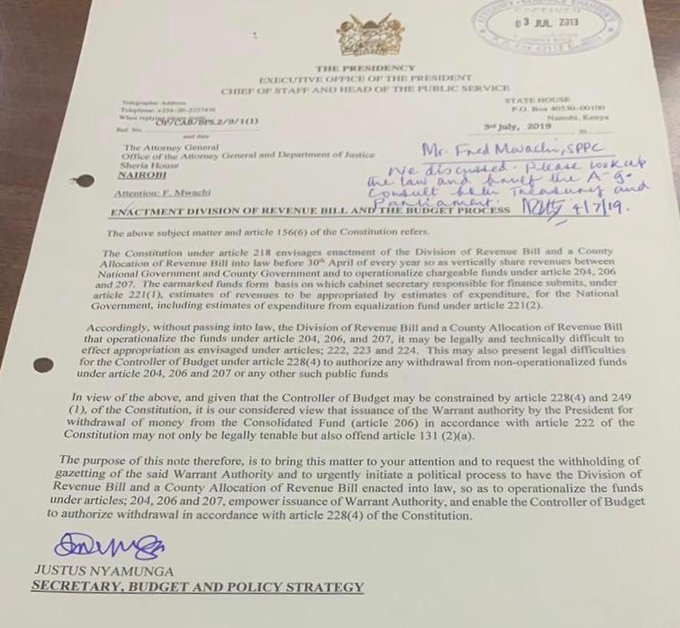