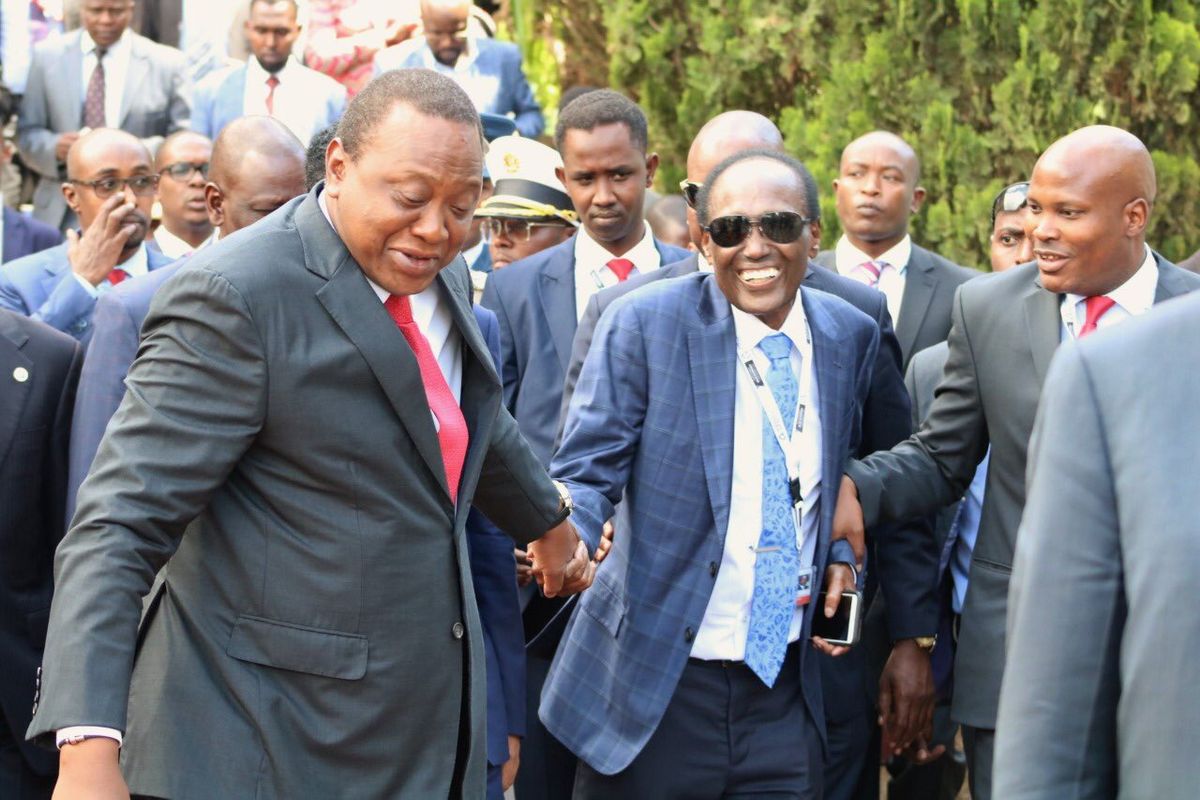 President Uhuru Kenyatta holds the hand of businessman Chris Kirubi on the sidelines of the Blue Economy Conference in Nairobi in November last year. Kirubi was flown to the US for further treatment at the weekend. [Photo/Chris Kirubi/Twitter]

Sources familiar with the matter say the businessman, who was diagnosed with cancer, returned to the top US hospital, which he has been attending after he started feeling unwell.

Kirubi, who was first flown to the US for treatment in November 2017, had appeared to be on his way to recovery and even resumed his role as a DJ on Capital FM’s breakfast show.

He owns the station as well as several other publicly listed and private companies. He is the single-largest shareholder of Centum Investments with a 28.64% stake.

One of Kenya’s most prolific businessmen, Kirubi, known in shorthand as CK (or DJ CK when on radio), holds leadership positions in at least 10 companies and organisations.

Kirubi has also been attending other public functions since his return, in addition to engaging upcoming entrepreneurs on Twitter using the hashtag #AskKirubi.

On Wednesday, he urged entrepreneurs to avoid procrastination by keeping a list of reasonable tasks that can be accomplished as it helps one to stay focused and avoid feeling overwhelmed.

“Once you begin, you’re halfway there! Avoid procrastination even when the task ahead of you is unpleasant. Ensure you keep a list of reasonable tasks that you must accomplish because this helps you stay focused and avoid feeling overwhelmed,” he tweeted.

On World Cancer Day, which is marked on February 4, Kirubi expressed hope that one day, the world will be cancer-free.

“This #World Cancer Day, I write from a reflective perspective. This subject is very close to my heart and my thoughts and prayers go out to everyone battling the dreadful disease. I would like to urge each and every one of you to go for cancer screening sessions and adopt a healthy lifestyle,” he said.

“No one is immune and early diagnosis surely saves lives. I would like to ask my government to actively raise awareness to the public on how to reduce cancer risk and accord affordable treatment to those diagnosed. Above all, I celebrate all who have fought hard and defeated cancer. Never lose hope,” he added.

Kirubi’s illness was first reported to staff at Centum Investments by CEO James Mworia in November 2017. At the time, there was speculation over his well being, with some saying he was in critical condition and had been admitted in the Intensive Care Unit (ICU).

Mworia said Kirubi had travelled to the US for specialised treatment, adding that he was in good spirits and engaged in business matters.

“Instead, Dr Kirubi, whom I spent time with on Monday and saw off at the airport, and have spoken to on multiple occasions since, remains in good spirits and actively engaged in business matters in his usual endearing fashion,” Mworia said.