The Law Society of Kenya (LSK) president Allen Gichuhi has come out in defense of lawyer Cliff Ombeta confirming that he is licensed to practice law hours after a section of lawyers claimed he is not qualified.

On Thursday during the hearing of Willie Kimani murder case LSK lawyer Stephen Ongaro told Judge Jessie Lessit that Mr Ombeta’s had failed to renew his practicing license thus his certificate was canceled.

He further added that Mr Ombeta had not earned enough Continous Professional Development (CPD) points enable him renew the permit.

The LSK rules stipulate that an advocate attain at least five points every year by attending its functions and trainings.

However, Mr Gichuhi has rubbished the claims by Mr Ongaro and that he misguided the court. He further insists Mr Ombeta is a registered lawyer.

LSK, with a membership of over 14,000 practising advocates, is Kenya’s premier bar association.

Mr Ombeta is the counsel of three officers who are main suspects accused of killing lawyer Kimani, his client and a taxi driver in 2016.

Lawyer Kimani was human right advocate and an LSK member and the lawyer’s body is an interested party in the case.

Mr Ombeta has come under fire for delaying the murder trial after failing to show up in the court house on two occassions.

The murder trial that is at its crucial stage where the court is set to hear a confession video recording of one suspect who revealed hoe Mr Kimani, his client Mr Josephat Mwenda and taxi driver Joseph Muiruri were arrested tortured, killed and their bodies thrown into a river.

The trial has been adjourned to August 27. 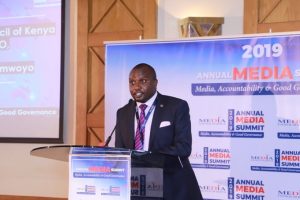