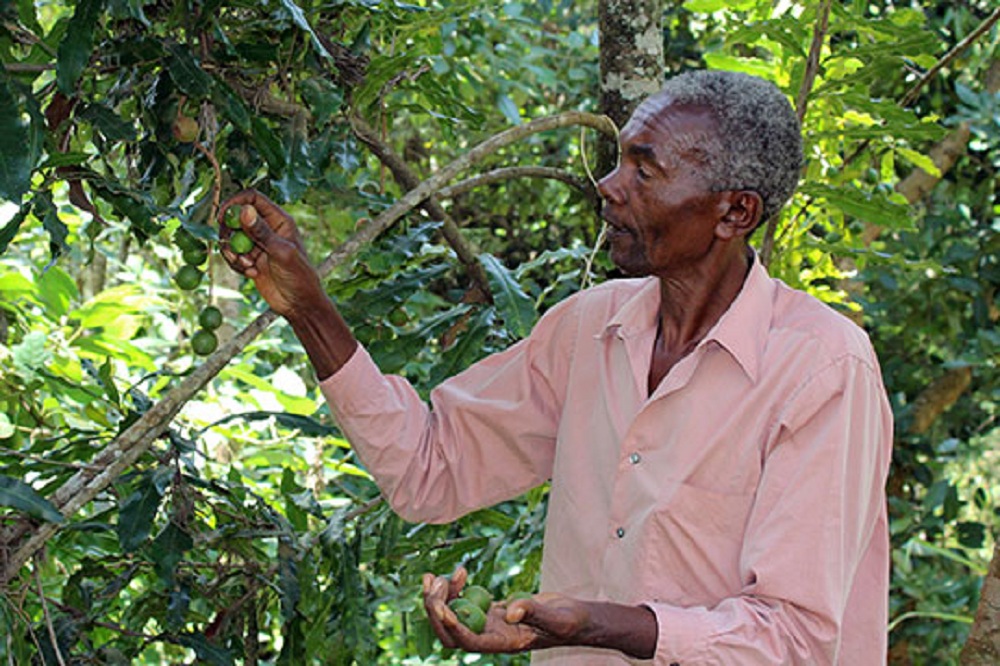 [dropcap]K[/dropcap]enyan farmers used to grow macadamia trees to shade their coffee bushes. Now they’re making so much from production of the nuts that they’re abandoning the beans.

Kenya, known for its prized Arabica coffee, is gaining a reputation for its macadamia with production rising to a record last year. Expansion in the world’s third-biggest grower of the crop is being driven by demand from China, according to Nairobi-based agro-processor Nawiri Agribusiness EPZ Ltd.

Farmgate prices for unshelled nuts have risen to as high as Ksh 180 a kilogramme this season from about Ksh 70 at the start in December, and may climb to Ksh 200, according to Alfred Busolo, head of Kenya’s state-run Agriculture and Food Authority. By contrast, many coffee farmers operate at a loss with their beans earning about Ksh 55 per kilogramme, according to a report last year by London-based advocacy group Fair Trade.

“Farmers are beginning to discover that this is gold,” said Loise Maina, one of three founders of Nawiri Agribusiness. “Wherever coffee is grown, macadamia also grows and farmers are now aware of the opportunity with macadamia.”

Kenyan coffee production has dwindled after years of mismanagement by the industry regulator to 38,620 metric tons last year from a peak of 130,000 tons in 1989. Macadamia production increased 5 percent to 41,614 tons last year, after growing more than 20% over the preceding two years, according to the AFA. At current prices, last year’s macadamia crop was worth Ksh 7.49 billion. The coffee industry earned 15.9 billion shillings last year, according to the Nairobi Coffee Exchange.

Farmers in Kiambu, Meru, Embu, Murang’a and Kirinyaga — highland regions that surround Mt. Kenya, the source of the volcanic soil that suffuses Kenyan coffee with its strong acidic and fruity notes — are now the biggest producers of macadamia in the country.

The US is the biggest importer of shelled macadamia, according to the council’s latest statistics, followed by China and Japan. Producers exported 31,187 tons in 2016, more than double shipments made a decade earlier.

Kenya’s production is expected to increase within the next four years when saplings with better yields mature, according to Maina, who sources the nuts from subsistence farmers.

Nairobi-listed agriculture companies including Kakuzi Plc and Sasini Plc have joined small-scale farmers in diversifying into the high-value nuts that are eaten raw, roasted or added to confectionery. Macadamia oil, which is unsaturated and cholesterol-free, is used mainly in pharmaceuticals and cosmetics.

Kakuzi has been producing kernels since 2016, having planted macadamia trees where it once had coffee. Macadamia sales more than doubled to Ksh 371.6 million last year, according to its latest annual report, making the nuts the company’s second-biggest earner after avocados.

Smaller rival Sasini, which has been growing coffee since the colonial era that ended in 1963, is constructing a macadamia-processing factory that’s scheduled to crush its first nuts this month. “Both these new lines of business, macadamia and avocado, show a lot of promise and the respective industries are thriving globally,” Sasini said in its latest annual report.

Kenya now has 27 licensed macadamia processors, from just five in 2013, Busolo said. Other than ensuring there is regulation to govern the sector, the agency will stay out of the industry, he said. With coffee, poor management by the state proved harmful, farmers say.

“We want the private sector to play a key role, unlike coffee, which had a lot of government involvement,” Busolo said.