A rider logged into the Bolt app. The company is seeking to expand into semi-urban towns

Ride-hailing app Bolt is planning to expand to other towns other than the eight cosmopolitan parts of the country that it already operates in, the company’s General Manager for East Africa Kenneth Micah has said.

Speaking during an interview with Business Today, Mr Micah said that the Estonia headquartered company is happy with the performance of the app in Nairobi, Mombasa, Nakuru, Kisumu, Eldoret, Naivasha, Kakamega and Thika and as such is looking at the possibility of moving into other towns brimming with potential.

The General Manager added that the company will be operating in the additional towns by Christmas in order to capitalise on the festive season frenzy.

“I cannot emphasize enough the importance of the Kenyan market to our business. We are conducting market research on which towns are viable,” said Mr Micah “We are looking at a lot of things like employment levels as well as tastes and preferences of the customers.”

He added that September was a good month for the company due to the arrivals of American Televangelist and Entrepreneur T.D Jakes and Jamaican Dancehall Artist Konshens into the country.

“Normally September is usually a slow month for us but a combination of different factors this year including key events made this year an exception. We want to build on that performance and end the year on a high,”

On the recent decision by the company to hike fares, the GM said that the company only did so after factoring in macroeconomic factors like inflation and increasing costs of service.

“We are well aware that affordability is key. Before we make such decisions we consider a lot of factors like the drivers’ take home, the customers willingness to pay. We are very particular about netting more and more repeat customers and we cannot do that if we fail to give the riders value for their money,” added Mr Micah.

According to him, the transition from the company’s former brand name Taxify to the current Bolt has been well received in the Kenyan market.

“We noticed that the brand name Taxify did not cover the wide range of services that we are now offering, it was tailor-made for the traditional taxi business but we now offer other services including bodaboda hence the pressing need for change,” he said.

“It has also been seamless because right now you don’t hear many customers referring to the company using its former name like they used to,” he added. 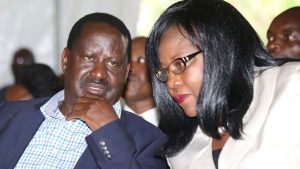