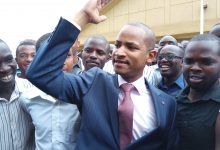 Embakasi East MP Babu Owino during a past event. He has been arrested in connection with shooting incident at city nightclub.

Embakasi East Member of Parliament Babu Owino was on Friday morning arrested in connection with a shooting incident at B Club in Nairobi.

The youthful legislator whose real name is Paul Ongili is being investigated over claims that he shot a staffer at the club.

According to witnesses, the incident occurred at around 4am. It is alleged that Babu drew his gun and shot the worker identified as DJ Evolve. The DJ whose real name is Felix Orinda is believed to have been unarmed.

Shortly after the incident, Babu together with other revelers and the club’s management rushed the victim to Nairobi Hospital with a bullet lodged in his neck.

An operation was conducted on him and the bullet was removed.

The police rounded up the MP at the hospital as he was waiting for the victim to be attended to.

It is not immediately clear what prompted Babu to shoot Orinda but police say they are investigating the matter to find out the circumstances that led to the unfortunate incident.

Babu is a licensed firearm holder and is said to be a regular at the nightclub.

Babu is currently being held at Kilimani Police Station.

Meanwhile, police have camped at B Club as they try to find answers to the puzzle. The police are set to quiz him over the incident as they establish how he made way into the club with a firearm on deck.

The investigations will include reviewing CCTV footage to see what led to the incident.

The MP adopts a gangly character in the Kenyan political landscape and is full of antics and sideshows.

On Thursday, he caused a storm on Twitter after he posted that his party leader, Raila Odinga must become president in 2022 by whatever means necessary.

Earlier in the week, he was involved in a verbal spat with Nairobi Woman Representative Esther Passaris after Babu threatened to shave all parts of Kandara MP Alice Wahome’s body over her perceived disrespect to President Uhuru Kenyatta and Orange Democratic Movement (ODM) Party Leader Raila Odinga.

See Also>> Babu Owino: Radical Who Will Spice Up Parliament