The NMG Board says talks with government over advertising debts paying off. [ Photo / Business Today ]

Nation Media Group profit for the half-year dropped 23.7% before taxation to Ksh403.7 million, from last year’s Ksh529.2 million, as turnover declined and costs ate into earnings.

NMG, a leading media house in the region publishing Kenya’s biggest newspaper Daily Nation, recorded a turnover of Ksh4.58 billion, down 7% down from last year when it managed Ksh4.92 billion. The earnings were devoured by ballooning costs that topped Ksh4 billion, leaving the company holding less in terms of net earnings.

Mr Richard Tobiko, the NMG Group Finance Director, told investors the half-year performance mirrors the rising number of Kenyan companies facing financial distress. “A lot of organisations are struggling and they are ideally our advertisers,” he said at the investor briefing on Wednesday 28th August 2019. “A lot of time when firms struggle, they cut sales promotions and advertising budgets.”

Direct costs went up from Ksh851 million to Ksh970 million mainly driven by higher prices of newsprint in the global market. Operating costs, however, dropped by 8.5% to Ksh3.03 billion, attributed to improved productivity and efficiency.

This is the fourth straight year NMG is recording a fall in profit. Since 2016, the company’s bottomline has been shrinking – from a turnover of Ksh5.6 billion to Ksh5.2 billion in 2017 and Ksh4.9 billion in 2018 – a worrying trend blamed on increased competition as well as new digital media channels.

This sets up the media house for another fall in full-year earnings. The company has recently retrenched employees in a bid to reduce expenses, but that appears not good enough to shore up profitability.

Despite the dip in Nation Media profit, the Board of Directors declared an interim dividend of Ksh1.50 per share for the half-year, retaining last year’s rate. Based on the issued share capital of 188,542,286 ordinary shares of Ksh2.50 each, the total interim dividend payout will amount to Ksh282.8 million.

“Although the outlook is challenging,” said Mr Wilfred Kiboro, the NMG board chairman, “we remain confident on the actions being undertaken by the Group to mitigate the adverse impact of the economy, such as implementation of new revenue streams, measures taken in pushing for the clearance of Government debt and cost management initiatives.”

With media companies operating on an increasingly tight leash, eyes are now set on Standard Group’s financial results. The company, NMG’s closes rival in the market, swung back to profitability in 2018, recording a surprise pretax profit of KSh397 million, up from a loss of Ksh282 million in 2017.

Read Also: Meet the five Kenyans journalists who have made a mark in global media

Mr Kiboro said the Nation Media is engaging government on advertising debts, which has resulted in flowing payments of the debt owed to NMG. “The progress being made by Government to pay firms it is trading with is welcome and we hope this will continue as we move towards the end of the year,” he said.

He noted that the operating environment in East Africa remains challenging with unpredictable and, sometimes, hostile regulatory measures.  In May 2019, for example, the Uganda Communications Commission (UCC) directed the suspension of producers, head of News and head of Programmes in seven radio and six television stations including NTV Uganda.

Nation Media is engaging government on advertising debts, which has resulted in flowing payments

“Recently in Tanzania, we have seen the Government detaining journalists from media houses for unclear circumstances,” he said.

Erick Kabendera, a respected journalist and government critic, was arrested and initially questioned over his citizenship before being threatened with sedition charges. Joseph Gandye, a Tanzanian journalist with Watetezi TV was arrested for “publishing false information” after broadcasting a story about police brutality. 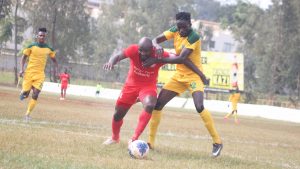