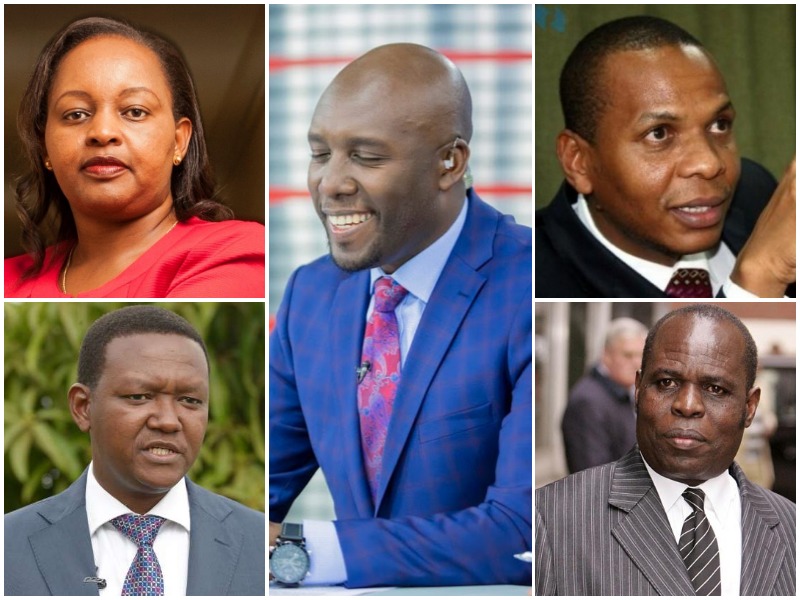 When taking vows in a holy matrimony, forever is what every couple thinks of their marriage. No one gets married just to divorce afterwards. In many cases the divorce turns to ugly scenes with couples attacking each other.

Weddings, ironically are as public as they are private. It is the joy of a community to see  couples getting married, and that explains the huge turnouts in such ceremonies. However, when divorce knocks, there is no community, family or friends in attendance, just the individuals and a broken marriage.

But, as the broken pieces are picked, the sun always shines after the storm. Below are five Kenyan celebrities who remarried after failed marriages with some dramatic exits.

In July 2000, Machakos Governor Alfred Mutua married the mother of his children Ms Josephine Thitu. Five years later the couple divorced citing irreconcilable difference bring the family drama to the limelight. At the centre of the dispute was a multi-million estate and custody of their three children.

After huge losses of property to his first wife and children Governor Mutua found a younger wife Ms Lilian Ng’ang’a fondly referred to as the first lady of Machakos. The two who met in 2011 and later married seem to be having a colourful life judging by the posts and photos shared on social media platforms.

The former Garsen Member of Parliament (MP) is not a strange to love triangles. After a failed marriage to his first wife the late Violet Mungatana whom they sired three children, Mr Mungatana went ahead and married former Miss Kenya Cecilia Mwangi. Their marriage, with one child also hit bottom rocks and the two went their own separate ways.

The crocodile eater then went ahead and married TV anchor Mwanaisha Chidzuga in the midst of drama with his relationship with Ms Mwangi. Ms Chidzuga and Mr Mungatana are blessed with four kids.

The smart and sassy Governor of Kirinyanga is set to marry his second husband City Lawyer Kamotho Waiganjo in July 2019 in a traditional ceremony. The two who seem to be head over heels in love with each other celebrated their engagement in February 2019.

This comes after the governor divorced his husband Mr Tony Waiganjo after a rocky marriage. The two who are reportedly in good terms after the governor bought him a BMW X5 as a gift a few years back, a sign that the two have long buried the torment and bitterness. Further, she still uses his surname.

The talented investigative journalist had a much publicized and definitely expensive wedding on 5th October 2015 to the girl of his dreams TV anchor Betty Kyalo. However, after a troubled marriage, Mr Okari split with the beauty.

In February 2019, Mr Okari found love again and wedded the woman of his heart Joy Naomi. The wedding was low key, colourful and the love birds were surrounded by close relations.

The controversial pastor who claimed had powers to give childless couple ‘miracle babies’ recently opened up about having a fiancée who is 50 years younger than him. He says, as a man of flesh and blood he cannot stay alone after divorcing from his first wife.

Mr Deya has further shifted blame to his first wife Mary Deya for the troubles that befell him when he was in Kenya and the UK. The two who were charged with stealing children in the name of ‘miracle babies’ have been legally divorced.