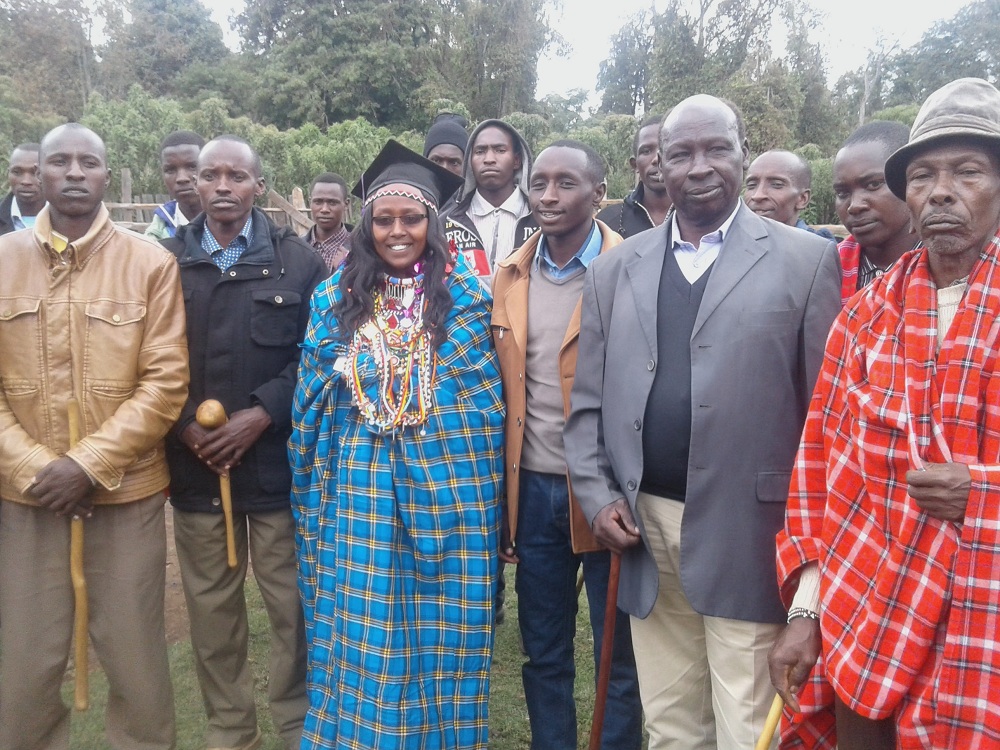 [dropcap]A[/dropcap]t the age of only 16 years, Ms Josephine Rotiken narrowly escaped early marriage after her family tried to marry her off to a 30 year man. Ms Rotiken had just sat her Kenya Certificate of Primary E*******n (KCPE) in 2007 and scored 344 marks out of the possible 500 marks at Ilpolton Primary school in Olokruto area, Narok County and was hoping to join high school.

Ms Rotiken had a vision of one day becoming a lawyer to fight for the rights of girl child in her community. Ten years later, there was jubilation and tears of joy in her village after she graduated with a degree in Law at Kabarak University.

Her home which is 30 kilometres from Olokurto center was an example of honor for men still rooted in cultural belief who wanted the young girl married off for dowry.

Ms Rotiken was forced to escape to her pastor’s home who later introduced her to Pastor Patrick Ngige, the Director of Hope Centre who helped in paying her secondary school fees at Nakuru Jomo Kenyatta High school where she scored grade ‘B’.

Her good grade gave her a chance to join Kabarak University in the year 2013 to pursue a law degree. On her graduation day, Pastor Ngige revealed that the sore relationship between the young girl and her parents had finally healed.

Pastor Ngige runs Enkishon Farm located about seven kilometres from Narok town where Rotiken was housed with tens of other girls who were rescued from early marriage.

The pastor quit his teaching job at Sekinani Primary School to address the nagging challenge faced by many girls in Narok County.

Throughout the celebrations held at her home early this week, Ms Rotiken struggled to hold back tears perhaps in reflection of her endless hurdles throughout her studies culminating to graduation with the first ever law degree in her village.

Her decision to run away in search of e*******n almost split her family apart although relatives and neighbors encouraged her to pursue her dream.

Her father Mr Kilopei Rotiken, who partly spoke in Maasai, expressed optimism for a brighter future to her daughter thanking pastor Ngige for ensuring her daughter completed her e*******n.

He called upon fellow men to embrace e*******n which he described as an eye opener and key to life.

Her mother, Mrs Nalomala Rotiken regretted her earlier deeds as she equally struggled to hold back tears perhaps in remembrance of the pain her daughter had to undergo to pursue her dreams.

SEE: The woman who loves d**d people – and making lots of cash from it

“I equally thank Pastor Ngige for enabling my daughter prove the community wrong through e*******n which remains a hard nut to crack for many parents,” she said in Maa language.

Mrs Rokiten recalled whipping her daughter severally for refusing to be married off to the man of their choice. “Young girls should not be stopped from going to school to pursue e*******n as this is the only key to success in the modern society,” she said.

The young graduate said she will join the fight for the rights of young girls more so against Female G*****l Mutilation and early marriage. She was delighted to have been joined by her parents during her graduation day following the fallout after she refused to be married off.

She revealed that throughout the four year program at the university, her father never communicated nor visited her at the University. This, she said motivated her to be more focused to prove to him that she can succeed.

“I feel indebted to my community and I commit to help in addressing challenges facing young girls especially from my community as a human rights activist. I intend to join the Kenya School of law and do a Master’s degree thereafter,” she said.

Ms Rotiken whose favorite meal is goat meat says that marriage is not a priority for her until she completes her e*******n. The low transition rate especially in pastoralists’ counties is attributed to retrogressive cultural practices like Female G*****l Mutilation (FGM), early pregnancies and marriages that deter girls from pursuing e*******n

According to County Statistical Abstract, 2015, only half of girls who sat for Kenya Certificate of Primary E*******n (KCPE) in the year 2013 joined Secondary school.

Machakos Governor Alfred Mutua Reveals How He Made Millions In Dubai