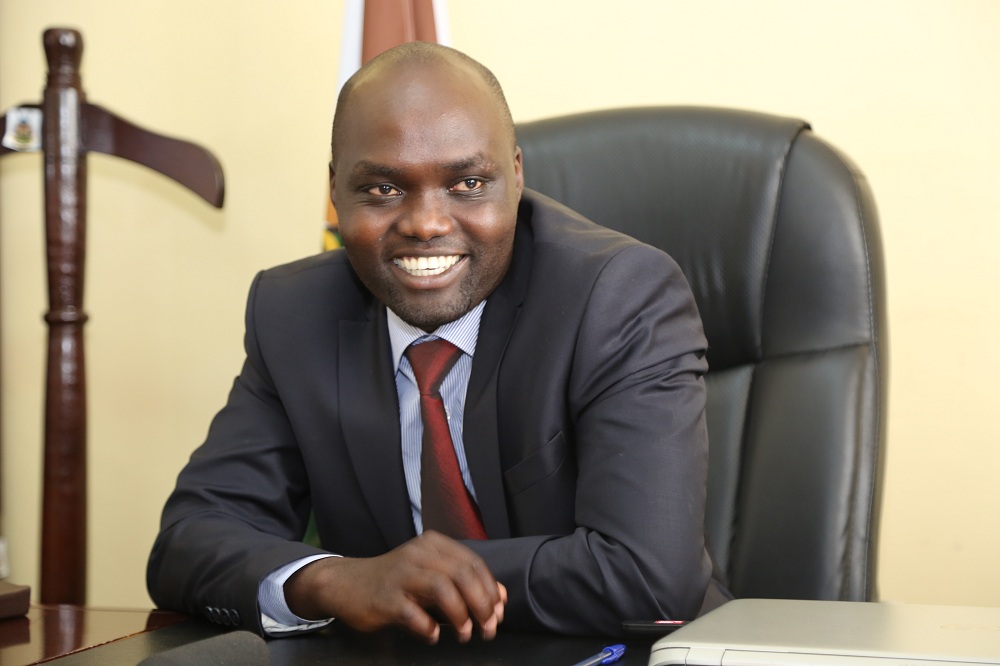 [dropcap]W[/dropcap]hen he applied to be the Elgeyo Marakwet county director of cooperatives, he never envisioned that this position would open many more doors in his life.

Wesley Rotich, the 30-year Elgeyo Marakwet deputy governor, told KNA that he sought the job to satisfy his quest to do what he loves best, to serve his people.

Rotich, who is arguably one of the youngest deputy governor in the country, said immediately he got his job, he embarked on reviving collapsed saccos.

“I believe, cooperative societies are the engine behind rural development and therefore I worked hard to see that the sector thrives,” Rotich said in his office.

One of the major achievements in his two year tenure as a director was to present the Cooperative Development Revolving Fund bill to the assembly which was passed. Under the bill which is now an act, the county will directly fund saccos.

“As a result of the act, the Assembly has already set aside Ksh10 million in the 2017/18 financial year to be loaned to the Saccos,” Rotich said.

According to the deputy governor, the issue of uplifting living standards of Elgeyo Marakwet residents is very close to Governor Alex Tolgos’ heart.

Therefore, during the course of his work, he was constantly in touch with the governor for briefs.

However, this one call from his boss threw him off balance momentarily. “When he called me, I thought the governor as usual wanted a brief about the sector. He went straight to the point and told me he wanted me to be his running mate in his second term in office,” Rotich said.

“At first I thought he was joking, but having dealt with him, I knew he was not the type to joke and especially on such a serious matter,” the deputy governor observed.

The Moi University Economics graduate said while the call surprised him, he didn’t hesitate or even think twice but immediately accepted the governor’s offer

“This is because I believe that one needs political power to influence change and it is also in politics that resources are distributed,” he said.

But while his family members supported the decision, it did not go down well with one person very close to him – his mother.

During his inauguration ceremony, Rotich told the crowd that she never called him during the campaign period.

According to Rotich, his mother was worried that his son had left a reliable job as a director to venture into the murky political world.

“In fact, my mum had said if I lost, then she would give one of my child to the governor and the other one to my brother as they are the ones who convinced me to join politics. Thank you for giving me a pay slip for the next five years and making my mum happy,” the father of two, an eight-year-old daughter and a two-year-old son, told the crowd.

Interestingly, the problem of unemployment among the youths was the main reason he was given the deputy governor’s post.

While he will assist the governor in administrative duties, his main role will be to engage the youth. The deputy governor knows this will be an uphill task following his experiences on the campaign trail and also listening to various leaders who spoke during the inauguration ceremony.

The leaders, including senator Kipchumba Murkomen, Women Representative Jane Chebaibai and area MPs, all said in every place they visited during the campaigns, they were ready to meet youths with certificates who are seeking jobs.

“However, I know that five years is a short duration but as the Chinese saying goes; a journey of a thousand miles starts with one step. I know I cannot solve the problem at once but if a few can start their own small and medium enterprises, it will be a step in the right direction,” he said.

Therefore, as he embarks in his job, Rotich says he has his work cut out. He says given the different ecological zones of the county, i.e the highlands, escarpment and the arid Kerio Valley there cannot be a blanket solution but that each area will require its own unique strategy.

The easy-going governor who describes himself as a risk taker says he is ready to face the situation. Rotich says he grew up in the Kerio Valley in Chegilet and bought his first lorry while in his second year at the university.

“I started engaging in business early in life selling fruits and cereals which thrive in the Kerio Valley,” he says.

Rotich added that apart from ensuring that there are right policies for youth development, he will embark on training them on financial matters especially the procurement act so that they can benefit from the 30% funds set aside for tenders for youth, women and people with disability.

According to the county director supply chain management Robert Chelagat, the three special groups did not exhaust the 30% set aside for them in the last financial year as they do not have access to tenders.

Related: A blind MCA with a great vision

There has been a feeling among residents that they require more sensitization on the procurement act which they say is too technical thus making most shy away from applying for the tenders.

Noting that the executive will require the assembly to actualise their dream, Rotich called for dialogue and harmony among the two while respecting the separation of powers so that together they can push the county development agenda forward.

He seems to be in good hands as the new County Assembly Speaker Philemon Sabulei said he expects the assembly to work with the executive to provide solutions to the many challenges facing the county key among them unemployment and poverty.

The deputy governor added that in a bid to develop the county, the cooperation need to go beyond borders saying there was need for all leaders in the North Rift to meet and discuss ways of maintaining peace along the Kerio Valley.

“This is because the continued conflicts have let to stagnation of development in the area,” he said.