National Super League champions Wazito FC are not leaving anything to chance as they prepare for their Kenyan Premier League season campaign.

Wazito have already bolstered their squad with nine new players, two of which joined the team on Wednesday. Wazito FC had earlier warned other KPL teams that they will be coming for the title this season. This was after they completed an amazing run in the NSL with the second-tier title.

With the new season less than two weeks away, Wazito FC have not been resting as they want to live up to their fans’ expectation in the KPL. In fact, they are just back from Tanzania where they have been training in preparations for the new season. While in Tanzania, Wazito played friendlies with a couple of clubs including Simba SC which will be playing in the CAF Champions League.

Wazito are working to address the places that were weak in last season’s team or maybe they are just setting up a new squad. The team has been on a spending spree this window as no other KPL team has signed as many players as Wazito has.

Despite winning the league last season, Wazito lost nine games which would have easily cost them the title. The team’s success only came because they won as many matches and only drew thrice. The KPL has fewer games than the NSL and losing 9 matches gets you further away from winning the title.

Kenyan International Bernard Ochieng’ is among the key defenders that have joined Wazito FC. There has also been the return of fullbacks Abouba Sibomana and Karim Nizigiyimana, who previously played for Gor Mahia. Wazito FC also signed two goalkeepers Kevin Omondi from Sony Sugar and Gad Mathew from Kariobangi Sharks.

Omurwa first joined Wazito in January 2017 after completing his secondary school education at Butere High School. He featured for Wazito for a season mostly as a defensive midfielder but has now established himself as a reliable central defender.

He then moved to Mathare in January 2018 and went on to become a key player for the Slum Boys in his two seasons there. His good performances have seen him develop to a key player for the Kenya U23 team and recently earned a call-up to the senior national team for 2020 CHAN qualification matches against Tanzania.

Oduor, on the other hand, is an attacking midfielder who can also play on the flanks or behind the lead striker highlighting his ability to easily adapt to switch in positions when called upon.
Currently, Wazito is playing in a preseason tournament with other KPL teams Mathare United, KCB and AFC Leopards at the Gems Cambridge International School. 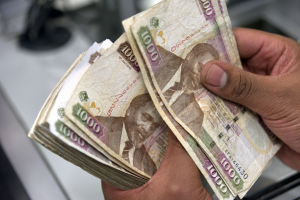 7 Smart Ways to Save Money
When it comes to managing finances, habits are what count…