Uganda’s Hima Cement, a subsidiary of Kenya’s Bamburi Cement, has a new boss.

A notice from Bamburi Cement confirmed that Jean-Michel Pons is the new Managing Director of  Hima Cement.

Jean-Michel has been at Lafarge for eight years and takes over at Uganda’s Hima Cement after a stint in Moldova.

“He joined Lafarge in 2011 and held various positions in Algeria and Serbia with the most recent being Chief Executive Officer, Lafarge Holcim Moldova,”  said Kanyagia.

The move comes after the exit of Nicolas George from the 12 person Bamburi Cement board.

George has been at the helm of Hima Cement since February 2018.

“The Board has accepted the resignation of Nicolas George as a director of the Company after he resigned from the Lafarge Holcim Group,” the Bamburi Cement board said.

According to Kanyagia, the change takes effect immediately.

The Nairobi Securities Exchange (NSE) listed company has been operating in the region amid challenging market conditions for cement producers. Fellow cement firm ARM Cement is currently under administration.

Bamburi Cement issued a profit warning towards the end of the year in 2018, indicating that its full year financial results were set to dip by 25%.

Last year, its financials for the half year had dropped by Ksh2 billion as compared to the same period of review.

The cement makers then had stated that a disputed 45% tax imposed in Uganda had been one of the features behind the 2018 HY decline.

The firm however is also overseeing Ksh8 billion capacity expansion projects in both Kenya and Uganda. The projects had undergone acceptance testing at the end of June 2018 and according to the cement manufacturers were fully commissioned on schedule.

[See Also: More than one million STIs transmitted daily, WHO] 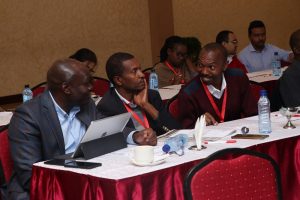