A Kenyan transacting on M-Pesa. Mobile money lending has contributed to financial inclusion and cheaper way of sending money from Kenya to Rwanda and Tanzania. [Photo/BD]

M-Pesa remains the most affordable way to send money across borders from Kenya to Rwanda and Tanzania.

In a report by Vodacom Tanzania, M-Pesa is the lowest cost channel for sending money from the East African economic hub to its neighbours.

The report was released during a stakeholders’ meeting in Tanzania.

Representatives from over 8 African countries

Key representatives from over 8 countries in Africa gathered at a workshop organized by Vodacom to look into trends and developments shaping the mobile money industry in Africa.

The report, the first of Vodacom’s Public Policy Series, demonstrates how mobile money is driving economic growth and empowering lives through financial inclusion.

M-Pesa has been Africa’s most successful mobile money service with research illustrating that mobile money has significantly contributed to social empowerment, economic growth and poverty reduction.

It provides people with a safe, secure and affordable way to send and receive money, top-up airtime, make bill payments, receive salaries and get a short-term loan.

Mobile money has proven to be a game-changer if the regulatory conditions are right. M-Pesa is the lowest cost channel for sending money from Kenya to Tanzania and Rwanda at around 3% of the transaction value today.

She calls for regulators to support this transformation by adopting a progressive, proportionate, and pro-mobile approach to remittances.

“Embracing the fact that mobile is the channel of the future – and the present – means regulators can focus on ways to leverage the strengths of mobile channels, rather than the ways in which mobile money is “less than” traditional banking services.”

Speaking during the launch of the new research on mobile money, Hisham Hendi, Managing Director, Vodacom Tanzania said, “Mobile money – supported by extensive mobile reach – has proven to be a platform for economic opportunity, transforming the financial services landscape, in particular on the African continent.”

The report notes that the future success of mobile money depends on the ability to deepen and increase the number of services facilitating seamless cashless experiences.

Reach me at [email protected]businesstoday.co.ke 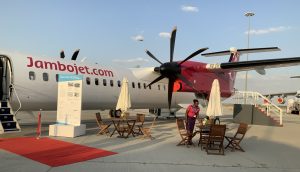 Jambojet Gears Up For Maiden Flights to Rwanda and Somalia
Launching the flights will be easy. The hard part is…